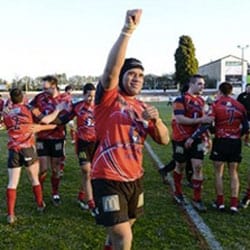 FROM the mean streets of New Zealandâ€™s South Auckland, hard-running Limoux prop Iafeta Paleaaesina is the first to admit heâ€™s achieved more than heâ€™d ever dreamed.

Earlier this week the heavily-tattooed Iafeta caught up with FrenchFootyâ€™s Katy Birse and spilled the beans on his sonâ€™s schooling adventures, why heâ€™s not getting anymore tattoos, the build up to the Lord Derby Cup final and whoâ€™s the real boss at home.

Now that youâ€™re out of the French championship finals, do you have any plans before the Lord Derby Cup final?
I think we are still going to be training. There is going to be like a mini preseason training, so a bit of running which is not my favourite thing. But, if you have to do it to try and keep fit than I guess youâ€™ve got to do it. There is a lot of time off between games. There might be a friendly match to give us a good hit out before the final. But mainly a lot of training and running.

Itâ€™d be nice to win your final after missing out on the championship final?
Yeah, definitely. I mean it would definitely make a positive for not doing so well in the championship, thatâ€™s for sure. (Lord Derby Cup final opponents) Avignon are a good enough team and we have beaten them this season â€“ but no doubt it will be another tough game â€“ they all are in the French League. There is no easy games that is for sure, I think maybe Pia are the only ones who stand out, but between us it is anyoneâ€™s game â€“ it just depends on who turns up.

After your win over St Esteve a few weeks ago, I saw your son run onto the field and into the change rooms with the team. Does he do that all the time?
He loves that kind of stuff, being around the boys. He is a boyâ€™s boy, that kid. I think he would love to play football but I think his mum isnâ€™t too keen on him getting injured, we might put him in tennis or something else. Iâ€™d love him to play rugby but weâ€™ll see what his mum says, she is the boss.

With a wife and a young family, how have you found the move to France after living in the UK for seven years?
Yeah, I am enjoying it here. Itâ€™s a big family club and a small village. They have welcomed me here with my family. The important thing was that before they signed me over here they wanted to make sure that my family was okay. I thought that was pretty good of them to put my family first. It just proved to me that they are a family club. Itâ€™s only small but the club is very close. Itâ€™s a small town but itâ€™s good for us we just walk to the shops and take my son to school.

Your son goes to school in France?
Yeah, he goes to school here. He is only four, it is pretty similar to preschool. They speak French at the school. There is an English-speaking teacher that speaks to us about his progress, but he is picking up a lot more (French) than me. Kids are like sponges, he picks it up so much quicker. He comes home rambling about stuff but I canâ€™t understand him, I just smile. I am probably the worst speaking out of our foreigners. We have classes but I come home and just speak English so it doesnâ€™t really help.

You have quite a few tattoos, do they hold any significance to your Samoan heritage?
Yes, I have all down my left side tattooed, I am trying to keep my right side clean. I have my left leg and my left arm done, they are all Polynesian tattoos from back home. I wonâ€™t be getting anymore though, (as) my wife isnâ€™t a big fan of any of my tattoos and they are pretty painful as well.

What are your plans for next season?
Iâ€™d like to stay as long as I can. I just have to keep playing well I guess and see what the board says. We havenâ€™t had the best of seasons here, we have had ups and downs. Itâ€™s disappointing not being able to make the Championship, but at the same time we were happy to make the Lord Derby Cup final at the end of the season. We have had a lot of injuries this season, so it might be a blessing in disguise with us not making the Championship. With seven or eight players out with injuries, at least it gives those players time to recoup and to get ready for hopefully the final game.

Do you have any plans on going back to the UK soon?
Well, Iâ€™ve spent the last seven seasons in the UK, so Iâ€™m looking forward to a decent summer for once. I hear the summer in France is suppose to be pretty good so my family and I would love to stay here for the summer but it depends on whether they resign me for a contract here next year. Like I said, Iâ€™ve been at the UK for seven years it would be good to chill out and get a tan.

What are you expecting from life after footy?
Iâ€™m not really sure. Iâ€™d love to return home, back to New Zealand, but itâ€™s pretty difficult because my wife is from the UK, so I will have to see what the wife says because she is the boss. But hopefully I can stay here for a while. I love Limoux and the French rugby league, so Iâ€™d like to stay over here for a while. When I finish football? I donâ€™t know. Iâ€™ve played league all my life, I havenâ€™t worked a real job yet â€“ so I better start looking for some jobs after footy. I have been pretty blessed and pretty lucky not having any serious injuries, I have just enjoyed it. A kid from South Auckland â€“ thatâ€™s the ghetto bit of NZ â€“ to be able to travel the world itâ€™s probably been the best thing for me. I got to meet my beautiful wife and then our children so that has been the biggest highlight so far.