Italian rugby league has been boosted, as the Azzurri prepare for their debut in the forthcoming World Cup, following a meeting with the countryâ€™s National Olympic Committee.

A delegation of FIRL Vice President Tiziano Franchini and Treasurer Fabio Di Pietro travelled to Rome to meet with the Secretary General of the CONI, Roberto Fabbricini.

The purpose of the meeting was to outline the spread of the sport, provide an update on preparations for RLWC2013 and to gain official recognition for rugby league as a sport in Italy.

“The meeting was crucial for the future of rugby league in Italy, our request for an interview was received by the Secretary General in a very quick and positive manner,” Franchini said. “This first meeting was an opportunity to make formal contact with the national body that manages the sport in Italy, to carry forward the process of official recognition of rugby league here.”

Secretary Fabbricini, agreed to begin the process of recognition and expressed an appreciation for the documentation submitted by the FIRL, which included its activity report and development plan and a letter of support from the RLEF.

During the meeting, Fabio Di Pietro invited the president of CONI John MalagÃ² and the Secretary General to attend the debut of the Italians in the Rugby League World Cup against co-hosts Wales, to be held on October 26 at the Millennium Stadium in Cardiff. 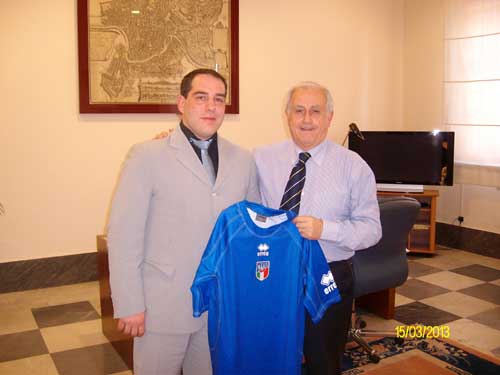