The South African Rugby League season for 2012-2013-season came to an exciting end with the club-finals held this past week-end at Tuks Groenkloof Campus.

Protea Cup Final (Second Division)
This game was one of those games where anyone could win. Half-time the score were only 16-12 in favour of the students. At the end the fitness of the TuksRL -guys were just that superior to that of the opponents.

Rhino Cup Final (First Division)
Like a typical Rugby League game the true reflection of such a game is to ensure your defence is working as a group. This was reflected through the game. The Tigers came to Pretoria to make sure that this will be one entertaining game. TuksRL kept the scoreboard ticking but also ensured with hard-fought defence that the Tigers do not get the chance to put point on the score-board. 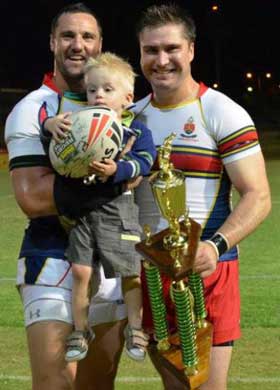 Extra:
– Riaan Engelbrecht (player in red short) was also honoured for his commitment to the club for 13 years. He played his last match for TuksRL and is immigrating to Australia with his wife and son.
– All First Team player had their right wrists taped in honour of abuse women & children.
– A minute of silence was done on both matches in honour of a RL-Ref, Callie Wildsnagh and his wife who died in a tragic motorcycle accident a week ago.