Carlo Napolitano, Head Coach of the national team, knows that 2013 and a good performance from his squad in the World Cup will help the development of Rugby League in Italy: â€œwe are going there to winâ€.

After the world cup qualifying tournament in 2011, which consisted of Russia, Serbia and Lebanon, gave Italy the final place and Italy’s first appearance in the Rugby League World Cup 2013. Head Coach Carlo Napolitano, himself a former Super League player with Salford City Reds and Italian international , knows that this is the most important period for the development of Rugby League in Italy.

This year the Azzurri will be playing the opening game of the World Cup against Wales on the 26th October, many things can change in Italyâ€¦

â€œYes, this is an extremely important year for Italy as a Rugby League nation and for the development of the game in Italy. Thatâ€™s why it is important to have a strong performance in the World Cup so we can get e Italian public interested in playing and push them towards a local club Italy and hopefully improve participation numbersâ€. 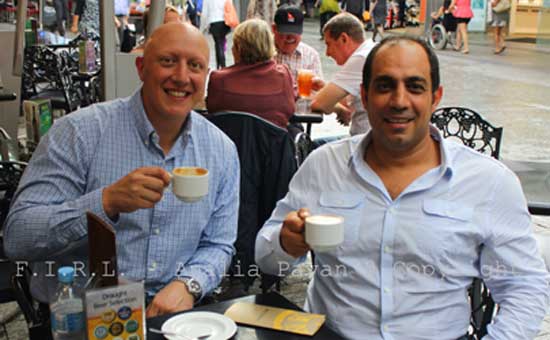 Why is so essential to have such important Australian players representing Italy?

“It is important for everyone to understand that all the players chosen are italian and it is up to me and my selection team to pick the best players that are eligible to represent Italia. Currently the best Rugby League is played in Australia. In addition to having the largest Italian community outside of Italy, it’s a formula that works in our advantage. Saying that my selection team will choose the best players based on ability not postcodes or countries. To have the calibre of high level players playing for Italy will always help because this will assist the growth of the game domesticallyâ€.

Before participating in the World Cup in October Italy will be playing in the European Shield but without the high profile names like captain Anthony Minichiello, vice-captain Cameron Ciraldo or Antony Laffranchi, Vic Mauro, Aiden Guerra, Craig Gower and Chris Nero due to their commitments for their clubs in the NRL and Super League. Is this positive or negative for the game in Italy?

â€œUnfortunately the NRL and Super League players are full-time professionals, so they wonâ€™t be release by the clubs that they represent. However itâ€™s a great opportunity for the domestic Italians players to represent Italy and gain valuable experience. Also for the Coaches this is great because without the European Shield we wonâ€™t be able to see them play. The players in the European Shield are the future of the game in Italy. They will be the next captains at their local clubs, the next coaches and the next NRL and Super League playersâ€.

What is the major goal for Rugby League in Italy?

â€œTo increase the number of players, coaches, teams and divisions participating in Rugby League in Italy. Hopefully we will see a side from Italy competing in the euro Super League in the near future and people will say that it’s because they performed well in the World Cupâ€.

And with is your goal as Italian coach?

â€œTo have a really good performance at the World Cup, not just to make the numbers up but to win it. Itâ€™s a big ask but if we can do it I can only imagine the interest it will generate to the public in Italyâ€¦ and this one is one of the things we as an organization are passionate about”.

How important are the small goals in the game?

â€œYou are right, all the small goals and a good performance in each half and in each match are important. In this type of tournament we need to concentrate at one match at the time and to win it and move on to the next one. Never think about the top step until you have conquered the front one firstâ€. (Carlo laughs)