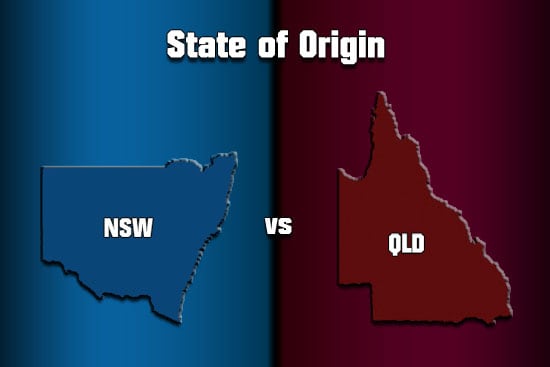 New South Wales will have the advantage this year with the 1st and 3rd games scheduled in for ANZ Stadium at Homebush. Queensland’s ANZ Stadium in Brisbane will host the 2nd game in the series.

In the build-up to the first game drama hit the Queensland camp with Cameron Smith ruled out with an elbow injury. Matt Ballin stepping into the dummy half role for Queensland. On the back of this NSW went from underdogs to favourites for the first game in Sydney. New South Wales also had injury concerns with Timana Tahu. Trent Barrett was put on standby just in case. Major changes were averted with Tahu passing his final fitness test. The Blues went into game one with a fairly smooth preparation compared to Queensland drama filled week.

Heavy rain fell down the day of the game. Many predicted a close low scoring game but Origin is always full of surprises. The first half saw QLD go to the break leading 12 – 8. The 2nd half saw the game open up with QLD running away with the game. NSW scored a few late try’s to keep within striking range but eventually ran out of time going down 24 – 28 in the first game of the series.

Prior to the 2nd game Timana Tahu stormed out of the New South Wales team due to racism claims. The Blues preparation was thrown into turmoil as a media storm engulfed the team. Joel Monaghan was rushed into camp to replace Tahu. Andrew Johns stood down from his roll in the NSW coaching team. As John’s comments were directed at Queensland players the tension between the two team increased significantly.

At a packed stadium in Brisbane tensions boiled over with all in brawls taking place throughout the match. In the end New South Wales just fired up the Queenslanders even more with the Maroons putting on a clinical display to wrap up the series. The final score of 34 – 6 was an embarrassment to the New South Wales blues who had just lost their 5th series in a row.

The 3rd game was all about Queensland completing a clean sweep of the series. With 10 minutes to go in the 2nd half of the final game at ANZ, NSW was in a position (18 – 13) to win the game. As always the Queensland team seemed to step up a gear when it counted and raced in a few quick tries to seal the series white wash.

Dear Readers, if you would like to talk more about the State of Origin with other rugby league fans please visit our international rugby league forums at http://forums.rugbyleagueplanet.com and have your say.