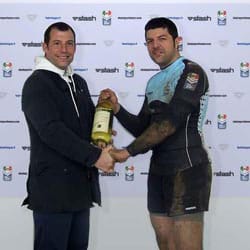 Arlecchini win the Lazio semi-finals and now have a ticket to Catania for the National Finals.

Ending with a victory for USAG (Unione Sportiva Arlecchini Gladiators) after a morning that saw the challenge at Ceccano with clubs Roma V, Ceccano and USAG participating. The USAG won the first match against Ceccano scoring 6 tries to 2. The two teams started well, but Arlecchini within range from a scrum scored and converted. Then both scored one after each other with three more tries. It was not all easy though because the Ceccano fought back and threw in a twist to the match with Gori scoring two tries. The USAG decided to close the match, and scored two other tries. The final result was 36-12 (6 -2).

The second match saw the hosts Ceccano battle against Roma V in their Rugby League debut. Ceccano, were very focused raising their competitiveness and had the better of Roma V for 31-5 (5-1).

Rome V debuted in the Cup, with a youthful team with their captain Cartella stating “I come from rugby union, but the speed of rugby league has won me over. Boys were aged between 17 to 23 years. Now for us it was the first game we played, but in the summer we plan to continue the adventure. “

The ultimate challenge contrasts USAG and Roma V, with a clear victory for Arlecchini as they pass the round with the final result being 16-0 (3-0). The captain of the USAG Claudio Gori said “We are really very happy with the result. Roma V was debuting, but has been proven correct and provided a positive approach with great desire to play. It’s a nice group but has yet to grow.â€ The match had little story, too the gap between Arlecchini and the youth of Cartella says Gori “we played together for two years and many of our players feature in Gladiators (r-Evolution League). It is however to be appreciated and emphasize the effort of Roma V, that despite the lower technical rate have proven to play this match with the utmost determination. v have respected the freshmen playing to the best of our potential as is customary in any rugby.

Now to turn to Belpasso, Catania, Sicily: “We go down to win and conquer the Coppa Italia. There are two and a half months to train hard because we want to bring back the trophy to Rome”.