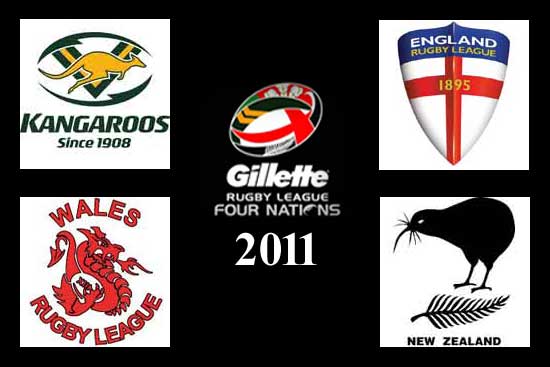 2011 Four-Nations Snapshot – The 2011 Four-Nations is the 3rd instalment of the highly successful rugby league competition. With the ongoing improvement of 2nd tier nations, the successful Tri-Nations series has been expanded. The Four-Nations will take place in England and Wales in October / November 2011.

Each team will play each other once in the pool rounds with the top two nations contesting the final. The Four Nations will run over four weeks. The double header concpet will continue with England playing Australia and Wales playing New Zealand at Wembely Stadium in London on the 5th November. Wales will also be taking on Australia at the home of the Crusaders RL, Racecourse Stadium Wrexham. All other games will be played in Rugby League heartland in the North of England. The Four Nations Final will be played at Elland Road Leeds.

The 2010 European Cup winners Wales have secured their place as the fourth team in the 2011 Four Nations. This will be the first time Wales have played in the Tri / Four Nations tournament and caps off a big few years for Welsh rugby league. This is a huge positive for international rugby league as 6 nations would have taken part in the Four Nations when the 2011 tournament kicks off. The RLIF’s plan to develop the international game is starting to pay off.

Wales rugby league has been through a rebirth which has seen local rugby league competitions drive a big increase in junior participation. In a small set back for Wales the Crusaders, Wales only SL team withdrew from SL at the end of 2011. Wales are going to have a big challenge on their hands. In many ways the 2011 Four nations is a test run for Wales Rugby League as they approach the 2013 Rugby League World Cup as joint hosts with England. Wales will also have pressure on them to preform as critics question weather the expanded Tri-Nations series is the way to go after the likes of France (2009) and Papua New Guinea (2010) suffered some heavy defeats at the hands of the big three.

The 2011 Four Nations is shaping up to be the most successful Tri/Four Nations tournament staged to date and will continue with the Rugby League International Federation’s (RLIF) plans to strengthen the international game at the top level. It is now over to Wales to fly the flag of 2nd teir nations and prove they can compete against the best three rugby league teams in the world.