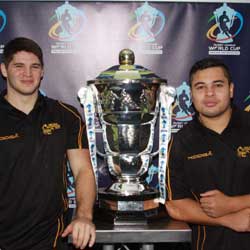 Both Tongan James Tutuila and Irish qualified Haydn Peacock are hoping to go far in the Rugby League World Cup this autumn and they had the chance to be photographed with the trophy itself when it recently visited a number of schools in Wales.

But before they even think about representing their country, they are concentrating on their club Rugby League which starts this Sunday at The Gnoll in Neath where the Scorpions take on London Skolars in the Northern Rail Cup (kick-off 3pm).

Tutuila, who played in the Queensland Cup before coming over to the UK, is looking forward to brushing off the cobwebs after his Australian season finished last August.

â€œI havenâ€™t played for a while so Iâ€™m really happy to put the jersey on,â€ he said. â€œI just want to play consistently throughout 2013. Dave Clark told me that this was a good opportunity to come here to Wales and make a name for myself. I want to have a big year and do a good job.â€

The 22-year old loose forward made his try-scoring Tongan debut last year in one of Rugby Leagueâ€™s most exotic locations.

â€œI played in Hawaii against USA which was a great place to make a debut,â€ he said. â€œWe had a good side out and we managed to get a win.

â€œI hear the coaches have already picked a 40-man squad for the World Cup and itâ€™ll be reduced to 22 in June. Hopefully Iâ€™ll play some good rugby this year with the Scorpions and make the cut.â€

Peacock, who went through the youth system at Australian NRL club Cronulla Sharks is equally looking forward to Sundayâ€™s match at The Gnoll and to try and represent the country of his grandparents.

â€œItâ€™s always good to get that first game out of the way â€“ round one,â€ said the 22-year old second row forward. â€œThe boys have been training hard for a few months now so we want to just get the cobwebs out and play some footy this Sunday.

â€œIâ€™m told we have a stronger side this year and a more consistent pre-season. Weâ€™re in a better position this year than this time last year and hopefully weâ€™ll do well this season.â€

â€œObviously Iâ€™m Australian but Iâ€™ve Irish ancestry so that qualifies me to play for Ireland. Weâ€™ve got a very tough group in England, Australia and Fiji â€“ three dominating sides. But thatâ€™s good experience and a great test for us. I just hope I play well enough this season for the Scorpions to be involved.â€

Admission to South Wales Scorpions v London Skolars on Sunday 3rd March costs just Â£12 for adults, Â£7 concessions, Â£3 for children aged 12 and over and free for under 11s. Adults and concessions can be admitted for just Â£5 on presentation of a ticket from the Neath v Bedwas rugby union match played the day before.

Before and at half-time of the main match, the Scorpionsâ€™ first ever season-long Primary Schools cup competition kicks-off. With six teams involved, each plays two games per event day. The action starts at 1.40pm with gates opening at 1.30pm