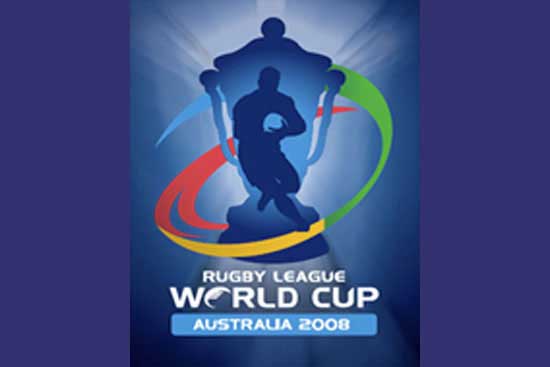 2008 World Cup Snapshot – The qualifying process for the Rugby League World Cup started in 2006. For the first time 15 nations competed for the five available World Cup positions. The other 5 places were filled by Australia, New Zealand, Papua New Guinea, England and France. The five teams that did qualify (Samoa, Tonga, Fiji, Scotland, Ireland) were the most prepared teams in rugby league history. They had played throughout 2006 and 2007 to qualify. Having 15 nations take part in the qualification process was a indicator to how far the code had progressed since the 2000 World Cup.

The highly successful 2008 Rugby League World Cup was the 13th installment of the oldest rugby World Cup tournament on the planet. The World Cup saw the best 10 rugby league nations battle it out for the ultimate prize. For the first time games were broadcast to over 127 nations with a global television audience of 19.2million making it the most widely broadcast event in the game’s history.

The tournament was hailed a new start for international rugby league. The goal of the RLIF was to use the World Cup as a stepping stone to fund the international game into the future. Games were played along the east coast of Australia from Townsville to Melbourne. The participating nations were split up into three Pools. This tournament differed from previous World Cup competitions with a Super Pool containing the four best rugby league nations. With the top 3 sides qualifying for the semi finals, the other two Pools battled it out for the remaining semi-final place. On back of the TV deals secured for the tournament the World Cup generated a profit of over 5 million Australian dollars which exceeded inital projections.

The games throughout the tournament provided highly entertaining rugby league. Papua New Guinea nearly defeated England in the opening game in Townsville. Ireland and Fiji tipped to finish last in their respective pools defied the odds to finish on top. Scotland won their first ever World Cup game. Fiji brought the Fiji Islands to a stand still by defeating Ireland to make their first ever Rugby League semi-final. The best was saved to last with the final putting the icing on the cake for World Cup organisers. New Zealand pulled off the biggest shock in World Cup history to defeat the raging favourites Australia. The Kiwis secured their first ever rugby league World Cup in front of a capacity crowd in Brisbane.

Europe (Round 1) Qualifiers: RUSSIA & GEORGIA – (Due to failure to play final game against Russia, Georgia did not progress to the next round)

In another first for International Rugby League Lebanon and Ireland drew both of their pool matches against each other. In the end the luck of the Irish prevailed and Ireland became the 8th team to qualify

Note: Georgia would have been included in this Group.

In one of the upsets of the qualifying rounds Scotland took the 9th spot in the World Cup and Wales were forced into the Repechage round. Wales won the 2nd encounter but could not make up the F/A difference. Scotland fielded a team with many part time players. This made the feat even more amazing, against a Welsh team with the likes of Lee Briers and Iestyn Harris.

With a big crowd at Aston, the US were rarely troubled by a Japanese side that showed plenty of heart. The US ran away with the game and booked a place in the Repechage rounds in 2007.

In Game 1 Lebanon showed courage when they came from behind in the second half. Wales went to sleep after half time and Lebanon ran away with the game. In Game 2 USA surprised many people when they held their own against a Samoan side with many big name players. In the end Samoa were to strong. In the Repechage Final Samoa raced to an early lead in the first half which was always going to make it hard for Lebanon. At full time Samoan’s celebrated their win with flags flying and the legendary Samoan haka.

The 2008 Rugby League World Cup will be hosted by Australia. 10 teams will be split up into three groups. The tournament will differ from previous events with a super pool including the top 4 rugby league nations.

The finals format will differ from previous World Cup tournaments. The teams that finish in the top 3 within Pool one (Super Pool) will qualify for the semi finals.