1995 World Cup Snapshot – The 1995 World Cup celebrated 100 years of Rugby League. For the first time 10 teams took part in the tournament. In the opening game England caused an upset by beating Australia 20 -16 in front of 41,271 fans. That set the scene for the rest of the tournament with many classic games. The semi finals produced two great games. New Zealand pushed Australia and could have won the game with a try on full time. NZ missed the conversion locking the scores at 20 all. Australia ran away with the game in extra time booking a place in the final. In the other game England had to work hard to beat a determined Welsh side that gave their all. In front of 66,540 at Wembley, Australia defeated England 16 – 8 in the World Cup Final. 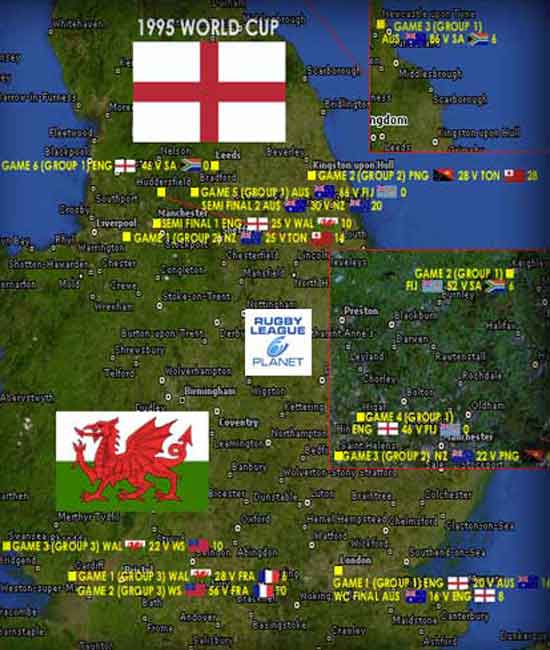 The 1995 Rugby League World Cup was hosted by England and Wales and celebrated 100 years of Rugby League. Ten teams were split up into three groups. It was the first time Fiji, Tonga, Western Samoa and South Africa took part in the World Cup.

The teams that finish in the top 2 within Group One qualify for the semi finals.

The teams that finish 1st in both Group Two & Three also qualify for the semi final.

The winner of both semi-finals will play each other a week later in the World Cup Final at Wembley Stadium.

The World Cup kicked of at Wembley Stadium with Australia playing England. England made a great start to the tournament by beating Australia 20-16. After the win England were rated a good chance of winning the World Cup for the first time since 1972. As history would show England stumbled at the final hurtle.

Overall the tournament was hailed a great success with good crowds and competitive games. With two sellout games in Wales, rugby league showed that the game had grown outside of it’s Northern England heartland.

The opening game between New Zealand and Tonga was a World Cup classic. New Zealand were clear favourites but someone forgot to tell the Tongan’s. Tonga raced away to a 24 to 12 lead over New Zealand with some enterprising play. New Zealand hit back late in the game to level the scores 24 all. In the dying minutes Matthew Ridge landed a field goal from right in front to seal the game for the Kiwis.

Game 2 was a tightly contested game. Tonga were in the lead for most of the game. Every time Tonga looked like running away with the game PNG would bounce back staying within striking distance. PNG scored the final try in injury time to level the scores at 28 all.

The opening game saw Wales race away with the game against France in front of a record rugby league crowd for Cardiff.

In the second game Western Samoa went on a try scoring spree leaving France to think about the next World Cup.

The final game saw the best two teams Wales and Western Samoa battle it out for a spot in the World Cup Semi Finals. On the back of Jonathan Davis, Wales proved to strong defeating Western Samoa 22 – 10