This week The Dragon went to the 2013 version of the Cabramatta 9â€™s! After a pretty cold few days preceding this, this loyal International Rugby League fan feared that the carnival wouldnâ€™t go ahead. But thanks to confirmation from Tas Baiteri (twice), it was official that despite the not so good weather the â€œshow was to go onâ€.

Dragons view of the Tournament!

One thing that really stood out for me was the crowds! When domestic NSW Cup teams were playing you had about 100 people watchingâ€¦but when the Japanese or Papua New Guineans played, youâ€™d have at least 500! When these kind of International Teams played or scored, the crowd went wild (and I do mean wild!). There were games between teams such as PNG and Amerika Samoa or the Australian Indigenous which probably got the greatest crowds of the day! Whenever one of the three Filipino teams played, it felt like they brought the whole Filipino Community in Sydney with them! (Same with PNG!)

Now due to there being a lot of teams and many games that were playedâ€¦I mainly focused on the International Teams in the tournament (since this is an International Rugby League website!). Today I am going to cover Japan, the Phillipines and Papua New Guinea (both First and Development sides)! Unfortunately I did not really get to talk to teams such as Greece, Portugal, Australian Cook Islands, Fiji A, Amerika Samoa, Niue and Italy, however I watched all of these teams play and the standard of their play was quite professional!

I had the privilege to talk with (and also hang out with) the guys from Japanese Rugby League. The Japanese were definitely one of the crowd favourites. Although some of their team are foreign (born overseas), a lot of the group can speak Japanese and some had lived in Japan for up to even 7 or 8 years! A couple of the team had recently competed in the recent Oz Tag World Cup in New Zealand which just goes to show how dedicated these guys were for anything with an oval shaped League ball!

The Japanese guys were well supported. When they played against the Australian Cook Islands they were at one stage winning 10-4, however fate rewarded the Cooks and the Japanese unfortunately lost 22-16. It was a tightly contested game and again it got the big crowd who had attended the match talking about how great of a game it was.

One of the most heartening stories of the Japanese were that they had scored the most points at the tournament than ever before! Even their coach Mark Sargent, (a support coach for Cabramatta RLFC), praised his teams efforts and did a fantastic job coaching the Japanese boys! Mark and the Japanese boys did a fantastic job in the tournament! They played their hearts out and even though they were defeated from teams such as Niue and the Philippines quite comfortably, they had the look of a professionally run Rugby League side!

The Philippines had three teams fielded in the tournament (Red, White & Blue). From my understanding, they had their first squad, second squad and an Under 20â€™s squad. Although all of their players were Australian based, their players and management had truly come to play footy! All three squads were well supported by all of the Filipino fans. Even when one of the Tamaraw teams was playing, the other two teams and fans would go to support their fellow players which were great to see! The players had passion in their jersey and the country they were playing for on and off the field!

Although Asians are known to be physically smaller than their European, African and Pacific Islander counterparts, some of their forwards and playmakers were very big and could put a dent through a steel door! Their players put big hits on teams such as Amerika Samoa and the PNG first team which was amazing to watch from a neutral perspective! Each Filippino squad had a lot of depth and players who could potentially play in NSW, QLD Cup or even the NRL! Each one of them had team spirit and was great to see how they played and the passion from the fans that came along to support them! Everytime they played, youâ€™d see a crowd of at least two or three hundred Fillipinos supporting them which was absolutely fantastic to see!

Like the Filipinos, the Papuan New Guineans had the passion, crowds and had the enthusiasm to entertain! They fielded two squads which were the Southern Regions Development Squad (pictured in Green) and the PNG Kumuls coached by the great Adrian Lamb (who I had the privilege of meeting!). Both sides had support from the crowd like there was no tomorrow!

In a match between the Development squad and Amerika Samoa, a large crowd had gathered to watch the match. It had everything, big hits, fast plays and fiery passions from both sides. It felt like a proper test match as both teams were going for the win and the crowd went crazy when either side scored. In the end the PNG side prevailed much to the delight of all the supporters who had come out to watch them play!

The Kumuls had probably the most experienced set of players in the entire tournament! Both the Kumuls and the Development side played with sheer power. One constant thing I noticed with their players was that they were tough but fair. In most of their games when teams got annoyed and tried to match PNG for strength with big hitsâ€¦the PNG boys would get straight up and simply play the ball. They werenâ€™t there to start a fightâ€¦.rather just play footy! Not only were they powerful, but also quick and could side step into a gap before teams could even see what had happened!

If you ever see a Papua New Guinean Rugby League team take the fieldâ€¦prepare to by blown away my friend! 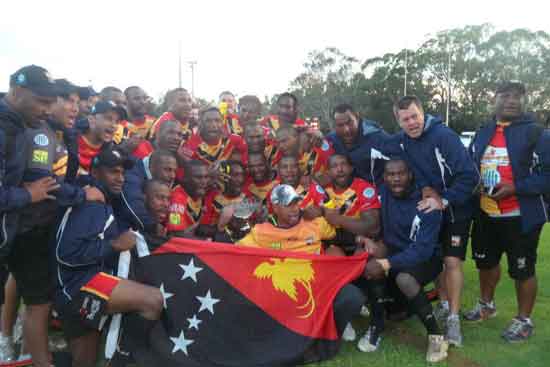