The Philippines National Rugby League (PNRL) is proud to announce that it is returning to the Cabramatta International 9s on the 2nd February 2013; the scene of its original success, coming into the Rugby League playing fraternity with its inaugural Bowl Trophy win on the 4th of February 2012.

Since that fateful day in February, the PNRL has gone from strength to strength gaining many supporters in the process with official sponsorship from the Philippines national carrier the Philippines Airlines. With the national team now know as the PAL Tamaraws. 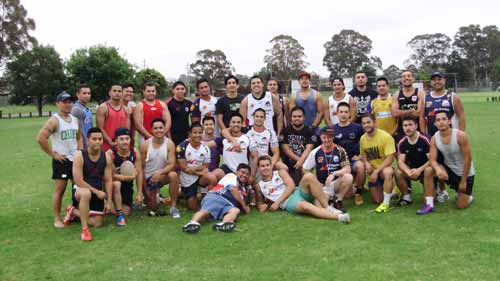 That is why it has been able to register three teams to compete in the 2013 tournament, such has been the overwhelming support shown by the Filipino community. 45 Filipino-heritage Rugby league players from NSW, Queensland, South Australia, the ACT and even overseas from New Zealand have been selected to play in either the PAL Tamaraw; Red, White or Blue teams. All players are eager to do their best for the Philippines at this tournament.

The PAL Tamaraws are eager to have the support of the Filipino community so all are invited to come to the tournament at the Cabramatta leagues Club on the 2nd of February 2013. Any enquiries about the PAL Tamaraws can be directed on the contact address that is located on its website www.pnrlf.com