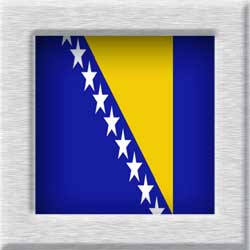 The last few weeks have seen a marked increase in rugby league activity in Bosnia and Herzegovina. On 3rd November Banja Luka hosted the â€˜Open Championship of the Republic of Srpskaâ€™, which saw four Serbian and two Bosnian clubs face each other at 9s.

â€œThis is a very positive development,â€ said Serbian RLF official Radoslav Novakovic, who referred the game. â€œThe White Rabbits have shown considerable improvement in the last few months and all three coaches from Bosnia who passed the coach education programme with the Serbian Rugby League in mid-August have utilized the knowledge gained to improve game awareness.â€

Sreten Zec, one of the coaches and the man who started the Bosnian Rugby League project added, â€œIn the last few months we have worked hard. At the moment we have two official registered rugby league clubs in Bosnia and Herzegovina, both in the Republika Srpska region. There are also signals of interest in the Bosnian Federation, in areas where Bosnjaks and Croats live, to form a club and we hope that will happen in very near future. We need three clubs to form a federation and that is our main goal in 2013.â€