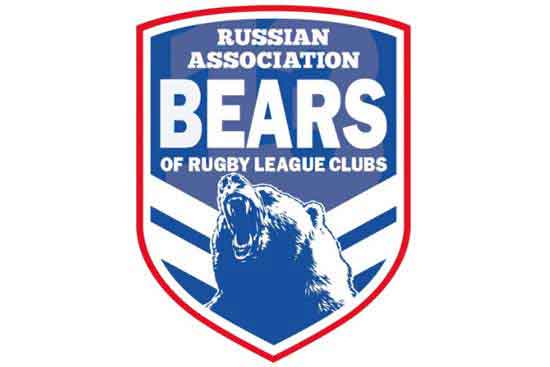 I’m not going to lie, the main reason I flew 10 hours to the beautiful islands of Hawaii was for a much needed holiday, but that didn’t stop me from learning a bit from Sean the man behind the burgeoning success of our great game in Hawaii.

If I was impressed by the progress made in just one year by the Hawaiian Rugby League, I left even more impressed by their pragmatic ambitions and professionalism after our meeting.

Meeting in the world famous Waikiki beach district, we shared a few oversized Budweiserâ€™s at the Cheeseburger Factory, a chain founded by three sisters who got tired of the daily grind in America and established a chain of stores in 1989.

Iâ€™ve had a few past dealing with Jack Breen, who ran the show whilst Sean was on deployment. I was pleased to hear that Jack is still happy to help out where he can with events on the island of Maui. I still firmly believe that Jack was a huge loss for the game of Rugby League, but meeting Sean allayed any fears I had that the future of Hawaiian Rugby League isn’t in good hands.

Sean, an Aucklander originally, believes that the way forward is through young Hawaiian boys and girls falling in love with the game of Rugby League. We couldn’t agree more with him there. We put youth development as our number one priority in Russia as well. What good are one-off flagship international events when there are no foundations to take advantage of the exposure that these events generate? We both agreed how integral it is that our organizations need to learn to walk before they can run.

Hawaiian Rugby League are currently attending schools on Oahu (where the capital Honolulu is situated) and have seen a fair amount of success with local boys taking a liking to Rugby League. Local Rugby Union team, Marist Brothers, are currently the leading club in terms of playing Rugby League, but there appears to be no shortage of other clubs or schools willing to try their hand at this unfamiliar and exciting game. When asked what these young menâ€™s first reaction to Rugby League was, Sean replied â€œMarist were surprised about the fitness levels required in League. The constant running up and down (the 10 meter rule) and that fact that thereâ€™s nowhere to hide on a Rugby League fieldâ€. 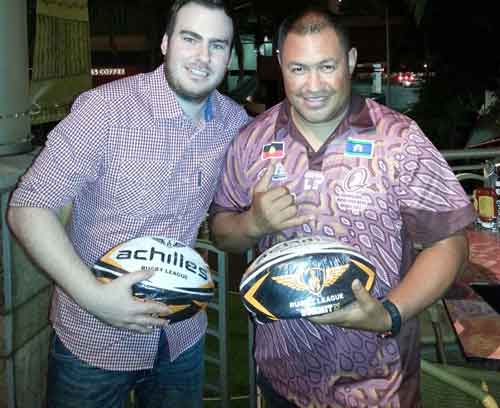 Whilst there are hundreds of American Football fields across the four main islands in Hawaii, there is currently only one Rugby (either code
) field. This is just one of the challenges Rugby League in Hawaii faces. Among other challenges is the establishment of Rugby League referees and coaches and the fact that a lot of locals work at least 2 jobs, drastically reducing their spare time and energy. This is primarily a result of the minimum wage being so low (around USD 10/ Hr)

During our three hour catch-up, which would have gone on if it wasn’t for our perspective partners, Sean received a text message from a local group of boys who were very keen to register their team in this weekendâ€™s nine’s tournament. Whilst this was somewhat a late registration to say the least, the fact that teams are lining up to try their hand at the new game of Rugby League says that thereâ€™s plenty of excitement locally to capitalize on this interest. Sean plans to do exactly this. There are around 6 or so teams who will be competing this weekend, with most of them new to the game.

I currently serve as the overseas marketing manager for the Russian Rugby League. I’m based in Australia and have grown up on the game of Rugby League. A lot of “heartland” fans (England, New Zealand and Australia) sometimes frown upon “Nine’s teams” being formed and prefer to see full sides of 17 players. This disgruntlement is completely unfounded an unrealistic. Nines are the reason Hawaii is seeing so many new participants lining up to play this weekend.
Russia is looking to stage a nine’s tournament of our own soon and hope it will be a great success. Things like this take time, especially in Russia where we are still somewhat getting back on our feet re-establishing Rugby League after a tumultuous few where you would be fair to say we pretty much hit rock bottom. 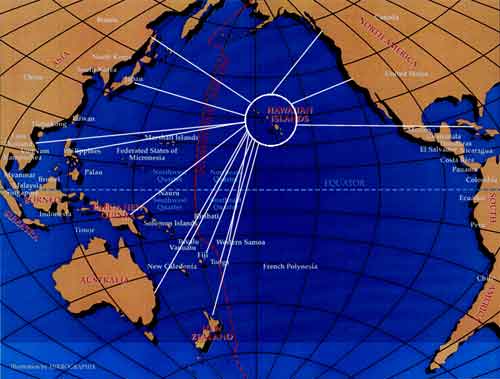 In somewhat of a small token gesture, we donated a bag full of Rugby League balls to help with the staging of this weekendâ€™s Hawaiian Rugby League Nine’s tournament. This will be an on-going commitment to continue donating Rugby League balls and equipment every couple of months.

You would be hard-pressed to come across a country or group of islands more perfect for the establishment of Rugby League. Sean pointed out Hawaii is one of, if not the last Polynesian island(s) to take up the game of Rugby League. This is something he is setting about to change. Hawaii is situated almost right in the middle of the Pacific Ocean, making it affordable for teams to travel from the Cook Islands, Samoa, New Zealand, Australia, Philippines, Japan etc. Throw in the natural psyche of the local Polynesian boys and you have a recipe for success.

As we all know, Hawaii is also a state of the USA. One of the challenges that they face is to find the right mix of pride in both the Hawaiian culture and the American culture. Hawaiian Rugby League is currently in the stages of designing their first ever Hawaiian Jersey. They welcome any input. All I could say about this was “make sure it has a “V”! It is hoped that Hawaii will be a part of a re-established Pacific Cup. The Pacific Cup was last held in 2009 and cost the Rugby League International Federation AUD 1.5 Million to stage. All seems to hinge around a successful 2013 Rugby League World Cup hosted by England and Wales.

Sean plans to imitate other programs that pacific islands have in place in terms of pathways of development i.e. the Kids to Bati program that Fiji have in place. It is hoped that when these young men pull on the Hawaiian Jersey in the future, it will be one of the proudest moments of their lives.

All of this said, the establishment of a consistent and stable domestic competition will be 80% of the Hawaiian Rugby League’s focus.
During our meeting, it became quite evident that Sean is a forward thinking man. He is looking forward to not just the next year, but at least the next 5 years. This is why Hawaiian Rugby League now have a long term business and development plan to work off.

Russia is currently in the stages of formalizing our five year plan and having sponsors such as JM Sports on board will help tremendously in assisting us with our goals an ambitions. Whilst each Rugby League organization faces their own unique challenges and triumphs, this meeting has shown us just how much we have in common with many other people trying to grow the great game of Rugby League around the world. Even something as small as following our Facebook pages helps that small little bit.