Saturday, October 27, 2012 will be a date to remember in Rugby League International history. For this was the day that Rugby League came to the Philippines.

This day is also unique because as stated by an Australian businessman, living in the Philippines. Who travelled all the way from Manila to Clark, after he had discovered the Clark 9s event on Facebook:

â€œNo Philippines national team would ever introduce their sports into the Philippines the way Rugby League has done it, which is to have local Filipinos showcase it themselves!â€ 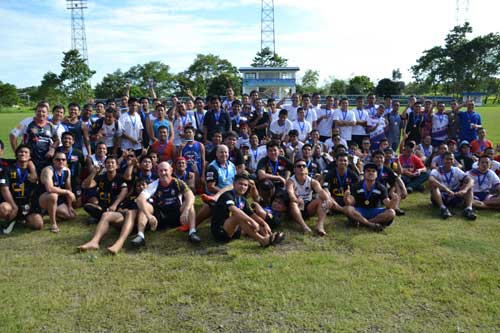 The Inaugural Clark 9s was an all Filipino affair, which was a vindication of all the hard work of Philippines National Rugby League (PNRL) board members living in the country, Rick Hartley, Tony Shibley and Cobi De Leon.

Since April 2012, this trio have met with, chased up, and travelled many kilometers in horrendous Manila traffic to various Maritime companies and academies and High Schools to spread the gospel of the â€œGreatest Game of Allâ€!

With this trio working in the Maritime industry, the foundation of Rugby League in the Philippines will be amongst the Merchant marines, engineers and sailors in this industry. This is be-fitting the history of Rugby league overall, with the sports starting amongst the working class factory workers and miners in Northern England. It is starting with the working class sailors of the Philippines Maritime Industry.

The months of hard work paid off with the following teams being coached Rugby League since April 2012 turning up to the Clark 9s:

With 20 students coming from DBTI, WÃ¤rtsilÃ¤ Subic Inc. brought two teams 18 senior students dubbed WÃ¤rtsilÃ¤ Whites and 10 junior students dubbed WÃ¤rtsilÃ¤ Blues. From MAAP came 20 Alumni Warriors, graduates from the Academy, some having played full contact Rugby Union since 2002 with some of them being past Philippines Rugby Union Internationals. Unfortunately the current Philippine Warriors the cadet students at MAAP were prevented from coming to the tournament by the Academy commander. 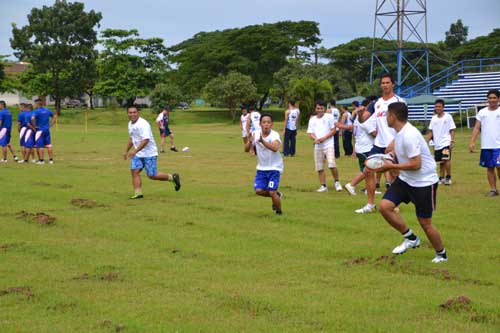 The cadets of V ships travel also suffered the same fate as the MAAP cadets, who were so excited after their classroom Rugby league clinic on Tuesday afternoon but could not attend on the day due to their lack of transport; hopefully they will be available for the 2013 Clark 9s tournament.

With all the recruitment work of Rick Hartley the following Maritime companies also sent competitors to the Clark 9s:

All up 89 local Filipinos turned up to try their hand at the â€œGreatest Game of Allâ€.

With the PAL Tamaraws, all of Filipino-heritage, the only expats taking the field on the day were the PNRL Board members Rick Hartley who played for the WÃ¤rtsilÃ¤ Subic Inc teams and Tony Shibley, for Anscor Swire Ship Management Corporation. The other two Australian expats Murray Domb and his son Gareth Domb played for the MAAP Alumni Warriors and both are involved with coaching the MAAP team, with Murray since 2005.

The PAL Tamaraws again played their part in developing the skills of all the local, budding Filipino Rugby league players. With all being split up and linked with a local side so they could coach and train them to play Rugby League.

So the day started with over an hours worth of Rugby League clinics with the International players leading the way, training their local Rugby league brothers the finer points needed to play the â€œGreatest Game of Allâ€. All the local players thought themselves natural league stars after great tutoring from their International heroes and all were pumped to show new found skills and for many, Rugby league skills being honed since April in a 9 a side touch football tournament. 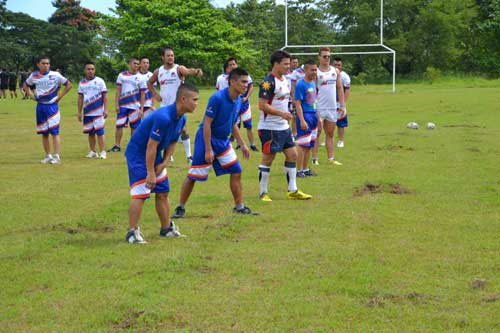 The local Filipinos led by their PAL Tamaraw teammates improved with each game. With both relishing the experience – the local Filipinos playing a new game and the International players teaching their local Filipino brothers. All formed genuine camaraderie on and off the field with the following results of the 9â€™s touch tournament:

During the touch football tournament the International players were impressed with the Alumni Warriors skill, with all having played full contact Rugby Union, with some having represented the Philippines at an International level. They had structure, ball skills, and game experience to win all their games.

Another surprise on the day were the Anscor Swire Ship Management Corporation cadets, they were only introduced to Rugby league in their first ever clinic the Tuesday before the tournament. The PNRL are grateful for the support of Hooters by the Bay, in Pasay city for supporting this Rugby League clinic and allowing it to be played on their part of the Manila Bay board walk. All these cadets so fresh to Rugby league, held out all their opposition to only 1 try a game. Not bad for a team with only 2 Rugby league training sessions under their belt.

After 7 months of being restricted to doing their Rugby league training in their schoolâ€™s basketball court because they are not allowed to use the school soccer field. The High School students of Don Bosco Technical Institute relished finally playing on a Rugby league field. Their months of training showed on the field drawing all their matches and not loosing any game.

What was evident at the Clark 9s was that without the support and sponsorship of the Maritime industry in the Philippines. The Clark 9s would not have been possible so the PNRL would like to thank:

for making the Clark 9s possible with their support and sponsorship.

The highlight of the Clark 9s was the end of day full contact match, with PAL Tamaraws and MAAP Alumni Warriors being mixed together to form two separate teams.

This was a highly anticipated event, especially amongst the relatives of the PAL Tamaraws, who had travelled far and wide to finally watch their nephew or cousin play this game they have all heard about called Rugby League but never seen.

The crowd of over 150 had learnt the rules having watched a number of touch football games and were now primed for a full contact match and understood what was happening on the field due to those proceeding games. They clapped at all the right moments, â€œooeeddâ€ and grimaced at each hard tackle and shouted and cheered as their nephew or cousin got the ball and made a run or tackled an opposing player. The crowd enjoyed the spectacle and from the response of the crowd made up predominatly of Filipinos the â€œGreatest Game of Allâ€ has a future as a spectator sport in the Philippines.

On the field the MAAP Alumni Warriors on either team, showed no compunction in taking the ball up and taking the hits in the tackles or making the hard tackles themselves. These Warriors impressed their PAL Tamaraw teammates with their skills and lack of fear to get involved in all physical aspect of the game.

For the record Team B defeated Team A 24-22 in a close match with the winning try being scored by the best Rugby Union player ever to come out of the MAAP academy to date â€“ Jasper Ching. He has been a PRFU Volcanoe International & has 3 test caps, as well as a Silver medal in the 2007 SEA games! He is now keen to keep on playing Rugby League.

The confidence and the respect that the PAL Tamaraw Internationals had for their fellow MAAP Alumni Warrior counterparts was wonderfully expressed by Mark Reyes in the scoring of the winning try in the final seconds of the match:â€œI was gonna dummy and go on the last try but Jasper looked heaps confident and called for the ball. Btw good anticipation and great finish Jasper!â€

This was a fitting ending to Rugby Leagueâ€™s introduction to the Philippines in the Clark 9s. A Filipino-Australian Rugby League International trusting his local Filipino counterpart with the crucial pass to win the game in the final seconds of the match.

Rugby League has a genuine future in the Philippines!