PNRL Board members living in the Philippines, Rick Hartley, Tony Shibley and Cobi De Leon have been doing their bit since April 2012 to develop Rugby League in the Philippines. With even a full contact Rugby League 9s game being played between the Merchant Marine cadets and graduates of the Maritime Academy of Asia and the Pacific (MAAP) in Bataan on April 14. Which ended in a 2 try a piece draw between the current students and graduates. 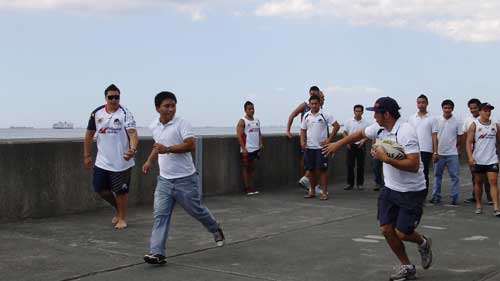 As well as MAAP, the trio of Rick Hartley, Tony Shibley and Cobi De Leon have also been conducting Rugby League clinics at the Don Bosco Technical Institue (DBTI) in Makati and with the Merchant Marine students at WÃ¤rtsilÃ¤ Subic Inc. a fully-owned subsidiary of WÃ¤rtsilÃ¤ Corporation, a Finnish engineering company. 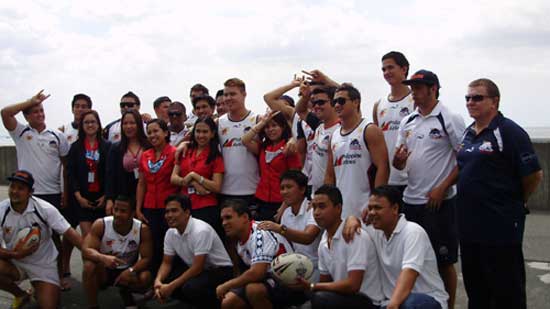 The three Rugby League board members have had their work cut out for them. For those unfamiliar with Philippines geography, it’s like coaching one team in Sydney then travelling up to Newcastle to train another, then heading west to Cessnock to train the other, then coming home to Sydney!

It’s in this Rugby League development context that the PAL Tamaraws have found themselves coming into, and they too, rolled up their sleeves and did their bit for the cause.

Day 1, October 23
The PAL Tamaraws traveled from Makati to Manila Bay to meet the cadets of Anscor Swire Ship Management Corporation. As is common in the Philippines the horendous Manila traffic meant that the national side missed the 11am-12pm booking of the only soccer pitch available in Manila Bay and had to ad-lib with coaching the cadets on the Manila Bay walk way, which was still enjoyed by all. With the Anscor cadets and female secreatarial staff enjoying the rugby league clinic.

Later on the afternoon the National players were honoured with a visit from Admiral Santos the President of the PNRL and the head of the MAAP Academy in Bataan. He congratulated them on making history by winning the inagural Asian Cup Rugby League International and he spent a significant amount of time talking to all the players.

At 5pm the National players all hopped into Taxis and made their way from the bay into the heart of Manila to meet with cadets of V.Ships Marine Travel. Which was an experience for the players because they had to conduct a Rugby League clinic in a classroom! Captain Luke Srama duly took charge of the situation and asked the students to move all their desks and chairs to the side of the room creating space to conduct a Rugby League clinic in a class room! From such a small space they showed the cadets Youtube videos of the PNRL Bowl Trophy win at the Cabramatta International 9s last February, clips of the International game against Thailand and conducted a rugby league clinic on passing the ball, playing the ball, making tackles – which was amazing considering the limited space. They spent close to 2 hours in the classroom teaching, talking and being the Philippines taking photos with all of V.Ships staff!

Day 2, October 24
This was an 8:00am, start for the PAL Tamaraws and all of them had been looking forward to this day since being picked for the team a couple of months ago, the visit to the Nayon ng Kabataan Orphanage in Mandaluyong city. Again the players had to hop into Taxis and make their own way to the orphanage, which was an experience in itself, because the players were travelling from wealthy down town Makati into the poor suburbs of Manila. The experience affected many of the players as they came face to face with Philippine poverty and many recounted that these were the places, where many of their own Mothers would have come from.

With all the primary school children attending class during the visit and all the female orphans in compulsory workshops. The morning was spent with over 40 boys all eager to connect and make friends with all these young men coming from Australia. The Rugby League clinic coordinated by Captain Luke Srama, Richard Goodwin and Mark Reyes were a resounding success over the 2 hours. The boys of the centre showed a lot of skill and courage and did not shy away from the physical tackling of the game.

It was during the breaks, between clinics that one witnessed very touching moments with the boys and the players, with each one playing, talking and making conections with each other, there were a lot of hugs being shared around. The players were all genuinely touched by their experience at the Nayon ng Kabataan Orphanage.

The PNRL would like to thank Ms. Nene Casa one of the head social workers of the Nayon ng Kabataan Orphanage for allowing the PNRL to visit and Ms. Kumi Kobayashi the cousin of Luke and Matt Srama who works for another NGO, for handling all the negotiation in country between the PNRL and the Orphanage.

After such an emotional event the players again found themselves hoping into Taxis and travelling from Mandaluyong to South Makati to run more Rugby League clinics, this time at the Don Bosco Technical Institue. This clinic was important for the stutents of DBTI because they were finally going to meet their heroes who they had heard so much about with all the clinics conducted by Rick Hartley, Cobi De Leon and Tony Shibley at this “trade” high school.

Even with the usual late afternoon South East Asian afternoon rain the players and students appreciated having access to a sheltered basketball court to conduct their Rugby League drills. The students were keen, lapping up every piece of advice from the players as they went through the paces of the rugby league clinic.

Day 3, October 25
With the afternoon rain not disipating since the DBTI rugby league clinic the previous afternoon. The players were still keen to promote rugby league. With the day slated in as one of visiting a number of Maritime engineering and shipping companies who had sponsored the Clark International 9s, the players knew how important this day was for the PNRL and the necessity to thank sponsors who had made the first ever Rugby League tournament in the Philippines possible.

The mid morning started with a trip toTaguig city, to the Norwegian Training Centre (NTC) and RJH Consultancy Inc. Both corporations have been instrumental in promoting and developing Rugby Union and now Rugby League in the Philippines, with both companies sponsoring both codes of rugby at the MAAP academy in Bataan. The players spent time meeting the managers and cadets of both companies and talking to them about their work and sharing stories of their Asian Cup Rugby League International victory which all were keen to hear about.

As the players prepared to travel to the other corpporate sonsors of the Clark 9s, the heavens opened up and terential rain finally put a halt to the rugby league promotion and development work of the PAL Tamaraws.

Throughout this Thailand and Philippines Rugby League journey. Many things had been expected of this group of young men and all have delivered. Not just on the footy field but also with the promotion and the development of the game in the Philippines.

All PNRL players and management paid for this tour out of their own pocket, with limited sponsorship support. They paid for all airfares and accomodation in both the Thailand and Philippines leg of the Rugby League tour.

The PNRL board has been proud to be associated with such a fine group of young men.