South African Rugby-League kicked of the 2012-2013-season with a Rugby League-Nines-tournament held at Silverbacks RLC (Pretoria) in partnership with TuksRugbyLeague.

Using the new format of RL-Nines the games were set to be played at a much faster pace than the normal 13-man-code. This was emphasized by a slight modification of the rules with the scrums replaced by a â€œplay-the-ballâ€ and inclusion of a â€œpower-playâ€ whereby the scoring team could decide to either take the conversion-kick or go for another try in only one attempt or be penalized by having the game restarted on their own thirty-meter line.

Most of the clubs were also using this tournament to â€œintroduceâ€ their new players from union (15-man code) to this fast set sporting-code. Not having so much â€œstopsâ€ as union, made the entertainment that much better for the eager-beaver RL-runners.

TuksRL, as the host, made use of the opportunity to play three representative teams. New and old were selected in the three teams for the day-
TuksRL- Reds
TuksRL- Blues
TuksRL- Young Guns

For Group A the the logs after three round-robin games were as follows:
1. TuksRL- Reds
2. TuksRL- Young Guns
3. Thomahawks
4. Silverbacks

For Group B the the logs after three round-robin games were as follows:
1. Roosters
2. TuksRL- Blues
3. Tigers
4. Scorpions.

The full scores and photoâ€™s can be seen on the South African Rugby League Fanpage on Facebook. 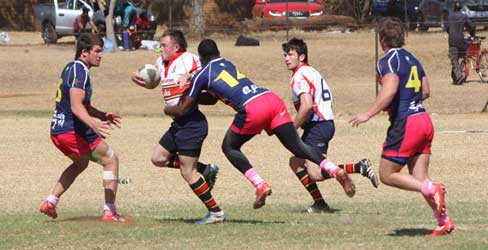 SARL Nineâ€™s Cub Final
The final was one of those entertainments left for last. The Rooster did not let the long travel from Bloemfontein handicapped them in this game. At the half-time the score was 6-all. In the second half TuksRL Reds added another 2 tries (one conversion) with Roosters adding one converted try.

Steve Muniafu (Nairobi, Kenia) studying architecture at TUT (second year playing rugby-league), David Watson & Grahm Logan (both from Zimbabwe) were some of the â€œinternational-representativesâ€ on the day. The youngest player of the day, Dwayne Bothma, 16 years of age was one of the TuksRL Young Guns who played like a veteran and is someone to watch in the future.

The SARL season kicks-off with the start of the 2012 North-Eastern Regional Derby-season this coming weekend in Brakpan.