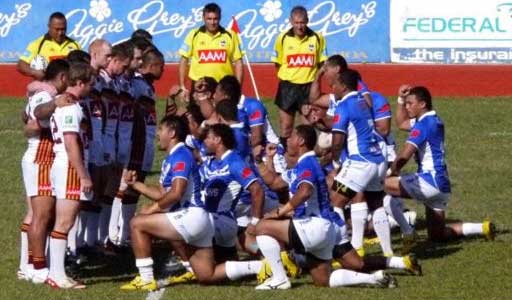 Toa Samoa made up of all local players looked lost in the first half trying desperately to stop the onslaught brought on by NSW.

It took almost half of the first half for Toa Samoa gain some momentum and sink into the flow of the game but every time NSW answered with a try.

Minutes into the first half NSW showed some nimble footwork and some spot on passing to score the first try and a successful conversion too the opening points to six to NSW.

Another corner try to NSW too their lead further to 10, conversion was also successful pushing the lead further to 12 with Toa yet to score. NSW was quick on recovery and attack, their defense proved perfect until Ionatana Tino broke the line and scored the Toaâ€™s first try with a conversion by Teofilo Lepou taking points to six against 12.

Lio Lolo also crossed the tryline and the conversion by Lepou was good and at the stroke of half time the score was 24 to 10 in favor of NSW.

A different Toa Samoa seem to take to the field in the second half but it was too late as NSW scored two tries in a row nailing all conversions to take the lead to 36.

It was a very physical game as both teams fought for possession and defense included some solid tackles from both sides earning the teams a word of caution from the referee. As the sun began to set at Apia Park NSW grew in strength and a frustrated Toa were victims to ill timed passes and minor handling errors.

Despite all that Tim Nelson and Paul Sauni crossed the tryline with Lepou converting one of the two tries to take the final score to 22 against NSW 36.

The tough game was a steep learning curve for Toa. The team took a lot out of the game to enhance their preparations for the second test to be played the following Friday.

Players of the match were Shane Grady of NSW and Labana Tofilau of Toa Samoa.