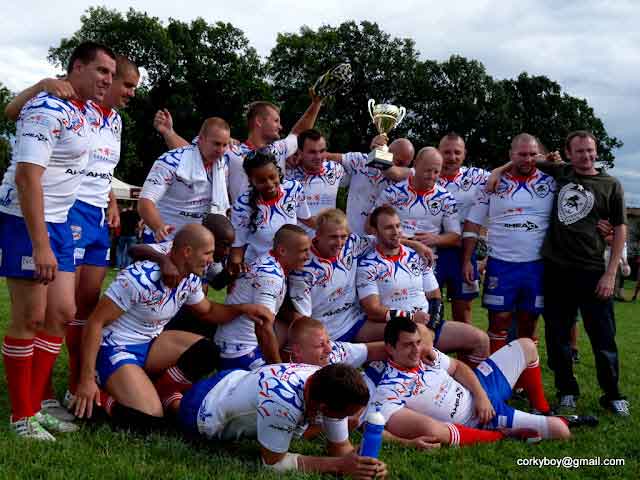 The Czech Republic have secured the European Bowl for the second consecutive year by defeating Hungary 42-16. The match was played in front of an enthusastic Vrchlabi crowd of 500 who roared with approval and chanted Ceski-Ceski as the home team opened magnificently, utterly dominating the visitors for the first 20 minutes of the match. During that period the Czech forwards constantly drove the Hungarians backwards with dominant running and the result was two tries each from prop Jiri Sluka and hooker Petr Sedina.

RLEF Man of the Match, Czech prop David Lahr â€“ on the home ground of the Mad Squirrels club, which established almost 2 years ago – served notice of his intent in the sixth minute, busting through the Magyar defence to set up Sluka for the opening try. Centre Pavel Zemanek, created the position for the next Czech points soon after, breaking down the right and passing the ball onto the Vrchlabi Mad Squirrelâ€™s other national team member, Standa Kosar who was cut short just short of his own tryline. Sedina scooted over from the play the ball.

The onset of rain midway through the 1st half coincided with the Czechâ€™s dropping in intensity considerably. While they maintained strong defence, their attack became less poised and was punctuated by poor ball security. A lack of direction from the Hungarians though, prevented them from capitalising before Czech team captain, Sedina scored his second, and the teamâ€™s fourth, try just before the half hour, and two tries in four minutes in the lead up to the break sent the animated crowd into raptures. Sluka made the most of a penalty decision to cross and, just as the whistle was about to go, fullback Jan Buben slid over to make it 22-0 at the break, Sedina converting.

Pardubiceâ€™s Zemanek extended the Czech lead in the 52nd minute, Sedina adding the goal but the Magyars finally managed to take advantage of the Czechs drop in intensity soon after when Zsolt Haboczki crossed for their first try, goaled by Gergely BÃ¡n, the visitors’ best on the day. The hosts regained control in the 63rd minute, Martin Cernohorsky finding the whitewash after a sweeping passing movement, with Buben adding the extras, but the visitors forced a goal line drop out from the restart and from that, BÃ¡n went over and converted his own effort.

A midfield break by Victor Leeuw set up supporting stand off Pavel Vrana for the hosts, Buben then arcing right and breaking clear down the touchline before sending the ball back inside for Pragueâ€™s David Dolak to complete the home scoring with their ninth try. Hungary scored the final try of the day when Juan Carlos Berbesi crossed from close in, but by then the game had been won and lost. The Czech team doninated for most of the match, and would have drawn many positives from their performance. They will also be aware though, that with better standard opposition expected to contest the Bowl in 2013 – a Rugby League World Cup year – they will have to continue with the rapid advance in both the standard of their domestic championship and their national teamâ€™s prowess to maintain Rugby Leagueâ€™s rapid trajectory in the Czech Republic.