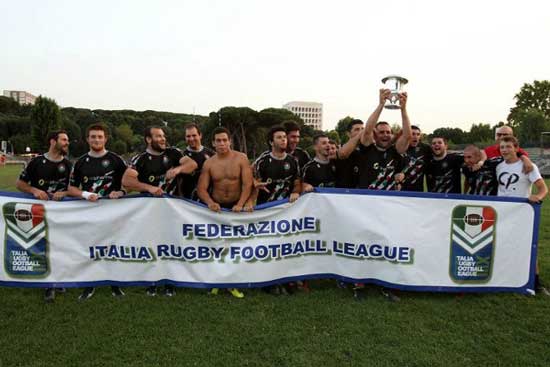 On a warm evening in the beautiful setting of the Tre Fontane dell Eur in Rome on Saturday, June 30 the Federazione Italiana RFL held the r-Evolution League Finals, the only national based rugby league championship in Italy. The best teams from the Northern and Southern Groups met in the morning semi-final clashes, until the third place playoff and Grand Final began from 6pm.

In the morning, the Spartans Catania (Sicilia) and the Magnifici Firenze (Toscano) both failed to overturn the odds placed against them and beat the top sides and last years finalists, Rex Albinea (Reggio Emilia) and Gladiators Roma. The Islanders lead by Massimo Nicotra (Director) against the Reggio Emilian lost 24 to 12, while the Florentines coached by Luigi Ferraro were overwhelmed by Roman armor 28 to 6. After a scheduled break to avoid the scorching heat that enveloped the capital, the Finals began later in the evening.

The third place playoff match was again won by Spartans Catania against Magnifici Firenze, only thanks to an extra conversion in winning a demanding game, 22 to 18.

Luigi Ferraro, technician and founder of Magnifici said: “I am very pleased with how the boys played, none of them has ever given up during the two matches and I want to thank all the Magnifici who took to the field in the 2012 edition and our sponsors EMCW Engineering and Vigna Vittoria, who have supported us for 3 years and without their precious help we wouldn’t be finalists for the 2 seasons.”

In the Grand Final, 2 times champions Gladiators sweated more than a little against the Rex team led by renowned Samoan rugby union 15 and 13 player, Silao Leaega..

The second half started with the Rex going on the attack in an attempt to overturn the deficit with a siege in the first 10 minutes that lead to a try resulting from an offload through Leaega to 12 to 10.

Despite 3 injuries for the Romans, they didnâ€™t allow the Rex any room to move with the Gladiators advancing with two tries to Gori and one to Sirbu that sealed the historic romano “triplete” at 28 to 12 – three consecutive titles for the Campioni dâ€™Italia, Gladiators Roma.