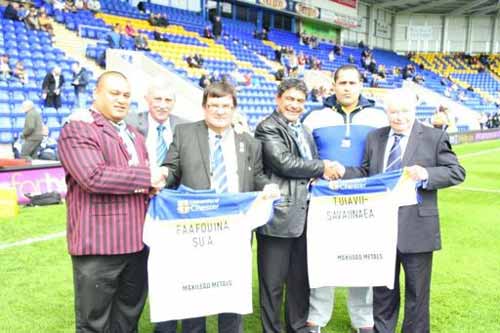 Representatives from Rugby League Samoa recently visited the UK on a fact finding mission in preparation for next year’s Rugby League World Cup.

The Samoan delegation had the chance to visit Warrington – host city of the Toa Samoa World Cup team. This provided an excellent opportunity to inspect hotels, training facilities at the University of Chester Warrington Campus, match venues at The Halliwell Jones Stadium in Warrington and MS3 Craven Park Stadium at Hull, as well as the general Warrington community. Hosted by Councillor Terry O’Neill and Warrington Wolves CEO Andy Gatcliffe, the experience was seen invaluable by the RLS delegates who can now prepare for the world cup more effectively.

The state of the art training facilities and home ground of Halliwell Jones Stadium, particularly impressed the RLS representatives.

“The facilities were awesome and fantastic. Technology now plays a bigger part in sport and new inventions to cater for training in-house for all weather has been superb. The University of Chester will be used as our training base and Professor Paul Harrop and his team has given us tremendous support with the people of Warrington.” Su’a said of the facilities and hosts. 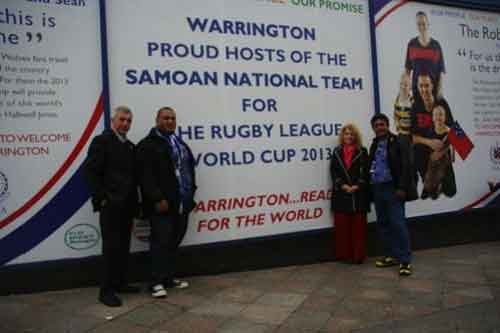 As guests of Warrington, the RLS delegates were also treated to a taste of rugby league in the UK, with an invitation to the Super League game between Warrington Wolves and Salford City Reds, after watching the Wigan Warriors vs Hull KR just days before.

Another highlight of the trip was the opportunity to meet Lord Prescott at a Parliamentary Reception held for delegates at Westminster Abbey in London, where the House of Commons meets. Delegates were treated with the upmost respect throughout the tour, almost always hosted by Councillors, Mayors or Lords.