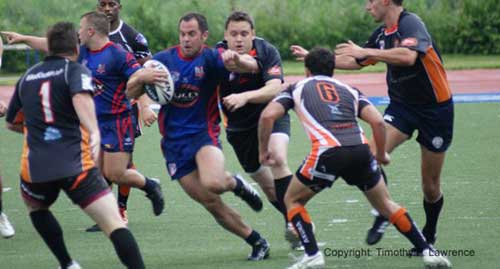 The New York Knights have hung on to clinch a nail biter in the Grand Final rematch, defeating the Connecticut Wildcats 26-22 in the second round of the AMNRL’s Atlantic Conference.

Going into the match as heavy favorites, the 2011 champions were quickly placed on the back foot, as the Wildcats got off to a hot start that took them to a 10-6 lead at halftime.

Their momentum continued in the second stanza as they extended their lead to 16 with an early second half try. Despite being behind on the scoreboard, the Knights kept their composure and clawed their way back into the match eventually reducing the deficit to four in the final quarter, before sealing the match in the final 10 minutes of play.

Knights captain Ben Sadgrove salvaged the come from behind victory, never losing sight of his team’s ability. As he told WeAreRugby after the match, “We spoke about what we needed to do at halftime with respect to keeping possession of the ball and being patient with our sets. Even after they scored first in the third quarter we felt very confident with each other and worked together both on and off the ball and pulled off a good victory today.”

For the Wildcats it was a case of the one that got away. “We had the upper hand early in the match and they seemed to be making the mistakes but as the match wore on we began to make mistakes of our own. In the end they capitalized,” said Cats’ skipper Curtis Cunz.

Mike Gowie led all Wildcats’ scorers with a hat-trick, while Dennis Schiller got on the board with the team’s fourth try to secure a bonus point and Mike Mulvihill booted three conversions to round out the scoring. Connecticut also bagged a second bonus point for keeping the final margin to within six points.

Elsewhere, the PA Bulls bounced back from their loss last week to secure a healthy 54-4 win over the NOVA Eagles.

In spite of being behind on the scoreboard, Eagles coach Christian Seaman was happy with his team’s improvement. “The guys worked real hard during the week and it was a great improvement from last weekend,” said Seaman.

With four new players on debut, the Eagles were well served by their man of the match Ed Fua, along with Greg Cappelli and Ben Wilson.

The Bucks County Sharks were also among the spoilers of Round 2, turning the tables on their Round 1 loss to the Northern Raiders and squaring the ledger with a 28-8 victory.

Next week the Knights will be hoping to continue their winning form against the Bulls, the Sharks will take on the NOVA Eagles, and the Wildcats will look to regroup from this week’s tough loss when they take on the Raiders.

The scheduled match between the Iowa City Crash and Western Storm in the new Midwest Conference was postponed and will be rescheduled.