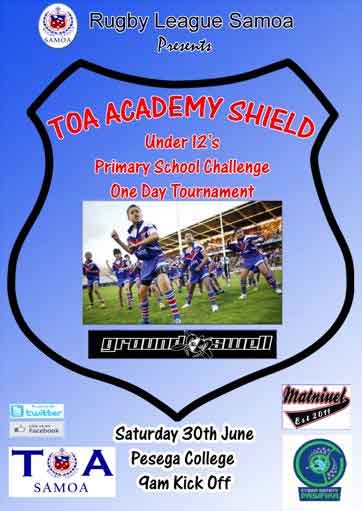 An exciting new rugby league tournament kicks off this week with the commencement of the Toa Academy Shield.

The Shield, sponsored by Groundswell, is a competition for under 12s players within the Toa Academy program. It provides the opportunity for young rugby league players to develop their skills in a focussed and advanced environment.

Players will represent their schools, with five competing for the shield – Marist, Peace Chapel, Vaiala Beach, Robert Louis Stevenson and Pesega. All schools have been training for the last month under the experienced Toa Academy Coaches, Sam Yue, Afa Lesa and Chris Newman.

Following the success of the under 16s Nigel Vagana Cup, Rugby League Samoa will now focus attention on a younger group of players.

“We started our development with the 16s and now it’s time we put some focus on the real grass roots of the game the under
12s. The kids are jumping out of their skin to play which is really  exciting for us to see the enthusiasm to play Rugby League. I
see a bright future for some of the kids already displaying a high quality skill set that I have not ever witnessed at such a young age,” Coach Chris Newman said.

Games for the Toa Academy Shield kick off at 9.30am thisSaturday at Pesega College. The grand final will be played on Friday 20th July as curtain raiser to the Toa Residents vs NSW CRL test.