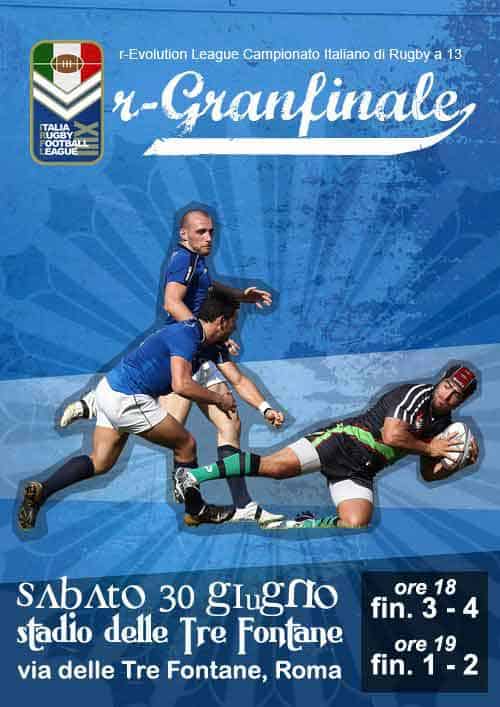 At stadio delle Tre Fontane in Romeâ€™s EUR district, at the historical home of Rugby Romano, the finals of the 3rd r-Evolution League will be hosted. The semi finals will begin at 9.30am with 25 minute halves to allow for recovery and best performance for the later matches. The final four teams ranked from the group stage will compete for a Grand Final birth. Rex Albinea, who were first in the Central-Northern Group will challenge Spartans Catania from the South, while the Gladiators Roma winners of the Central-Southern Group battle with rivals Magnifici Firenze.

The first semi final is a matchup that will compare last year’s runner-up with the Spartans that have managed to collect a large pool of players for Rugby a 13 from all over Sicilian territory, hence enhancing their competitiveness and presence this season.

The second encounter has the flavor of a classic Derby. Despite the fact that Magnifici have never managed to win against the Roman team, we all remember the final match of last season when the Magnifici lead by Ferraro put up a big challenge to the keeping the result in the balance and creating a fantastic battle.

The winners earn the right to compete in the Grand Final, while those beaten will contest the third and fourth place ranking match.

The fuses will be lit at 9.30 and 11am with the semi final showdowns and 6pm for the ranking match than the Grand Final at 7pm with admission free.

In the background, there will be a beneficial atmosphere to the day. In fact, the Federazione Italiana Rugby Football League will waiver the allocated finals budget investing part of it to the Reggio Emilian squad that were affected from the earthquake … A great reason for all to attend!

The Finals will again be the subject of television coverage that will be aired in the next few days on some local television channels and on a website stream.

Thanks FIRFL, we do Rugby League!