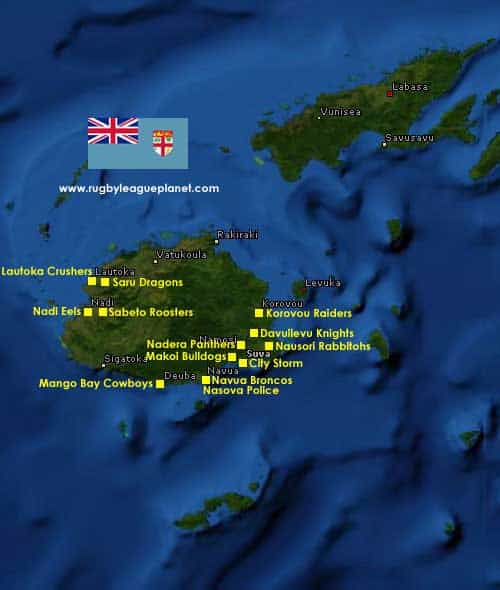 Top level domestic competition – The Fiji National Rugby League starts in April and is broken up into two conferences, East & West with 12 teams in total. Once the Grand Final is played a Super 6 competition takes place comprising of the best players from the FNRL. In September a State of Origin type competition is played with East against West.

History – The history of Fijian’s playing rugby league can be traced back to the 1960’s when the UK based Rochdale Hornets signed Orisi Dawai and Joe Levula. Fiji’s first major involvement with “rakavi saumi” or rugby league as we know it was via the 1992 Nissan World 7’s. It nearly didn’t happen as Rugby Union officials in Fiji imposed life bans on players switching to league. In Fiji’s first game, they defeated a star-studded Canberra line-up that included the likes of Laurie Daley and Mal Meninga.

Fiji’s first 13 a side tournament was the Pacific Cup against other pacific nations. Fiji have been involved in every Pacific Cup since.

In 1995 Fiji took part in the Rugby League World Cup for the first time. Fiji drew in the same pool as Australia and England and finished 3rd winning against South Africa.

Fiji were again involved in the 2000 Rugby League World Cup. It was deja vu as Fiji once again joined Australia and England in the same pool. Lote Tuquri was captain of the Fijian team during the 2000 tournament. As per the 1995 World Cup Fiji finished 3rd in the Pool beating Russia.

In 2006 Fiji became the 2nd team to qualify for the 2008 Rugby League World Cup. Fiji were grouped with France and Scotland for the Pool rounds. What was to unfold during the World Cup would be one of the success stories of the tournament. Fiji were not tipped to make it out of the Pool rounds.

In their first match they smashed favourites France 42 – 6. A week later they narrowly went down to Scotland by 2 points 16 – 18. Based on for and against Fiji finished top of their Pool and booked a place in the qualifying semi-finals against the other World Cup success story Ireland. Fiji and Ireland battled it out in the first half but the size and strength of the Fijian’s prevailed in the 2nd half. In the end Fiji continued their dream run and booked a place in the nations first ever semi-final against champions Australia.

Leading into the game some experts were giving Fiji a 100 plus start. In the end the Fijian’s went down to Australia 52 – 0. The score did not indicate the effort Fiji put into the game. At stages they had Australia on the back foot but could not get over the line when it counted. When the players returned to Fiji they were greeted as hero’s by thousands of fans.

Post World Cup the popularity of rugby league in Fiji has exploded. Local Fijian media have increased reports on local rugby league developments. Two new rugby league team’s entered the Fijian National Rugby League in 2009. Their has been a big uptake by secondary school’s fielding league teams. With the new found popularity for league in Fiji, it is only a matter of time before they come knocking on Australia’s door for a rematch.

In 2009 Fiji were ranked 4th in World seedings by the Rugby League International Federation (RLIF). This is the highest ranking Fiji has ever been awarded and is mainly due to their semi final showing in the World Cup.

In 2009 Fiji took part in the Pacific Cup competition. Going into the tournament on the back of their successful World Cup campaign everyone though Fiji would be one of the team to contest the final. It wasn’t to be as they were defeated by the Cook Islands 24 – 22 in the first week of the tournament. They restored some pride a week later by defeating Tonga 26 – 16 in a play-off for 3rd place.

Fiji go into the 2013 Rugby League World Cup (RLWC) looking to do one better then their 2008 RLWC semi-final finish. Placed in Group A, Fiji will open their World cup campaign against Ireland at Spotland Stadium, Rochdale, England on October the 28th (Monday). On November the 2nd (Saturday) Fiji will take on Australia at Langtree Park, St Helens, England. The Fiji Bati’s final group match will see them take on World Cup hosts England at KC Stadium, Hull in England on November 9th (Saturday).

Dear Readers, If you have first hand knowledge of the current Rugby League situation in Fiji we would love to hear from you. Please email us at: webmaster@rugbyleagueplanet.com or join our international rugby league Forums at http://forums.rugbyleagueplanet.com and let us all know what’s going on in your part of the world.