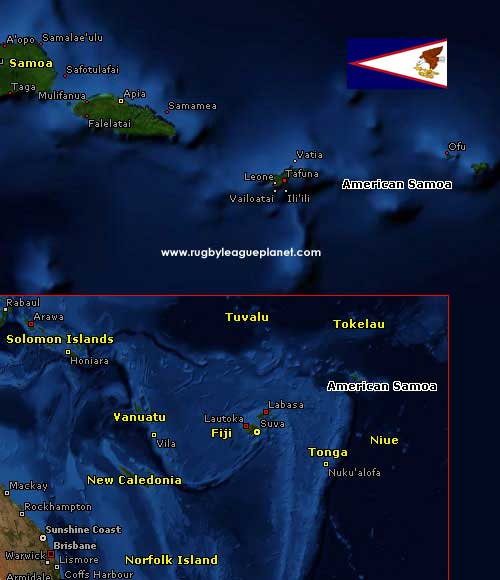 History – American Samoa is made up of six Islands located in the South Pacific. Not to be confused with Samoa (Formally known as Western Samoa) American Samoa has flirted with rugby league since the 1980’s. In 1988 they participated in the Pacific Cup competition for the first time. The early Pacific Cup competitions involved other pacific nations along with indigenous teams from Australia (Aborigines) and New Zealand (Maoris).

American Samoa has competed in the Pacific Cup four times since 1988. The 1998 Pacific Cup was American Samoa’s best showing to date. They won matches against the Cook Island and Tokelau and narrowly lost to Tonga missing out on a finals place.

American Samoa also played in the 2005 Rugby League Sevens. They have also been involved in 7’s and 9’s tournaments since 2005 with the most recent a 9’s competition in 2008.

American Samoa played in an International 9’s competition in Feb 2008 as part of a strategy to unearth more American Samoan talent. The pacific nation gets plenty of exposure to Rugby League via NRL and International games that are beamed into the Pacific via free to Air TV. The recent Rugby League World Cup will hopefully provide more funding to assist with the continued development of the sport in the pacific.

With a newly established rugby league board in American Samoa plans are underway to start a 4 team rugby league competition in 2012. The newly formed regional body “Asia Pacific Rugby League Confederation” will see rugby league interest in the Asia Pacific region go to the next level and hopefully match the growth rugby league has seen in Europe over the last few years.

Dear Readers, If you have first hand knowledge of the current Rugby League situation in American Samoa we would love to hear from you. Please email us at: webmaster@rugbyleagueplanet.com or join our international rugby league Forums at http://forums.rugbyleagueplanet.com and let us all know what’s going on in your part of the world. 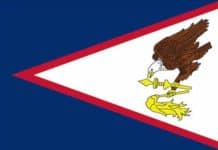