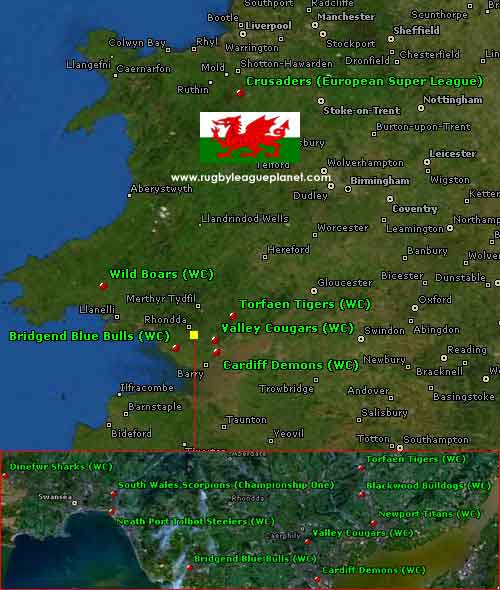 Top level domestic competition – 9 teams play in the Wales Conference. The Celtic Crusaders and South Wales Scorpions play in the Co-Operative Championship One.

History – Welsh players have a long history of travelling over to the north of England to earn money playing rugby league. Wales played the touring New Zealand All Golds in January of 1908 in the first ever rugby league test match of its kind.

The Welsh have played in the European Nations Cup since it’s inception back in 1935. They have been fairly successful in the tournament winning the Euro Cup four times. In 1975 Wales played in their first ever World Cup. The Welsh were grouped with Australia, New Zealand, England and France. To the surprise of many Wales won three of their eight games and finished 3rd overall.

In 1995 Wales played in their first Rugby League World Cup since 1975. The Welsh were grouped with Samoa and France. With the likes of Jonathan Davies in the ranks the Welsh team went through the group stages undefeated. In the semi-final Wales meet England in a highly entertaining game. It wasn’t to be for the Welsh as they narrowly lost to England 25 -10.

In the 2000 World Cup Wales were grouped with New Zealand, Lebanon and the Cook Islands. The First game saw Wales easily account for the Cook Islands 38 – 6. In Wales second group game they just defeated Lebanon 24 -22. The following week New Zealand proved why they would later play in the final by handing Wales a rugby league lesson winning 58 – 18. The Welsh bounced back a week later in the Quarter Final to defeat Papua New Guinea 22 – 8 and booked a place in the semi finals. The Dragons meet the Kangaroos in the Semi-final. Wales nearly pulled of the upset of the tournament when the went into the half time break leading Australia. It was all to good to be true and the Kangaroos raced back in the second half eventually winning the game 46 – 22.

Wales kicked of their 2008 World Cup qualifying campaign in 2006. In a major upset Wales lost against Scotland in the first qualifying game 21 – 14. In the return match in 2007 Wales defeated Scotland 18 -16. Unfortunately for the Welsh the for and against tally was in Scotland’s favour. Wales were forced to enter the repechage rounds to qualify for the remaining place in the World Cup. Wales faced Lebanon in the repechage game but could not match the enthusiasm of the Lebanese losing 50 – 26. Wales were bundled out of the qualifiers and failed to qualify for their 3rd consecutive World Cup appearance.

In 2008 Wales were ranked 6th in European seedings by the Rugby League European Federation (RLEF).

Since the birth of the Celtic Crusaders (now North Wales Crusaders) in 2006 rugby league in Wales has made great strides. At the beginning of 2009 Wales had over 114 schools in South Wales that played rugby league with a record number of participants. Media exposure of Rugby League in Wales has increased significantly since 2006. Wales also have a team based in the South called the South Wales Scorpions.

Championship One team the North Wales Crusaders relocated to Wrexham in 2010 with a new team called the South Wales Scorpions starting off in Championship One in the South. It is hoped that these two semi-profesional teams will eventally work there way up into the Super League in years to come and assist with providing Wales with a production line of fully professional players.

Wales took part in the Rugby League Four Nations for the first time in 2011. They did not win a game throughout the tournament but showed they had what it takes to match it with the best three rugby league nations in the world.

RLWC co-hosts Wales have been placed in Group D in the 2013 Rugby League World Cup (RLWC) along side the Cook Islands and United States. On October 26th (Saturday) Wales will open their World Cup campaign at the Millennium Stadium, Cardiff in a cross group match against RLWC new comers Italy. Then Wales will host other RLWC new comers the United States on November 3rd (Sunday) at Glyndwr University Racecourse Ground in Wrexham. Their final match takes them to the The Gnoll at Neath in Wales to take on the Cook Islands on November 10th (Sunday).

Dear Readers, If you have first hand knowledge of the current Rugby League situation in Wales we would love to hear from you. Please email us at: webmaster@rugbyleagueplanet.com or join our international rugby league Forums at http://forums.rugbyleagueplanet.com and let us all know what’s going on in your part of the world.