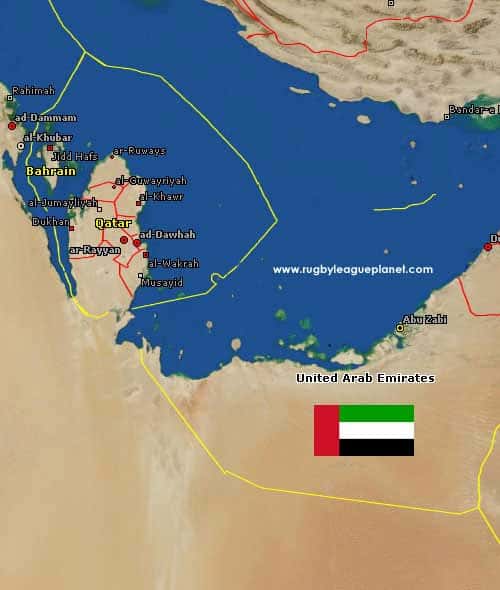 History – United Arab Emirates are a new rugby league playing nation and continue the trend of Middle East nations taking up the sport. UAE is made up of seven states, Abu Dhabi, Ajman, Dubai, Fujairah, Ras al-Khaimah, Sharjah and Umm al-Quwain. The drive to establish rugby league in UAE is on the back of the success and growth of rugby league in Lebanon.

In Feb 2008 the United Arab Emirates were unranked in European rankings but were awarded official observer status by the Rugby League European Federation.

On May the 2nd 2008 the first ever international game was played in Dubai. UAE’s national side could not match the experience of the Saddleworth Rangers going down 36 – 18.

After the 2009 World Club Challenge, many called for future games to be played at a neutral venue. Dubai was mentioned as the ideal place to host the yearly event. The Rugby Football League advised that it would not happen in the next few years, but did not rule out Dubai hosting the tournament sometime in the future.

In early 2009 United Arab Emirates were unranked in world rankings but were awarded official observer status by the Rugby League International Federation.

In July 2009 the National team made history by winning their first ever international match against the Lebanon Espoir 34 – 10.

The Emirates National Rugby League are in the process of starting up new rugby league clubs for their inaugural 12 week championship commencing in October 2009. The ENRL are also planning to be stationed at the Dubai Sports City. The long term goal of the ENRL is to introduce rugby league into the Emirati school system to assist with the development of the game in the country. They are also striving to be involved in the 2013 World Cup Qualifiers scheduled to kick-off in 2011.

The recent success of the 2008 Rugby League World Cup will provide further funds to develop the sport throughout the Middle East. The Rugby League International Federation (RLIF) will now have more funds to invest in more development officers and continue assisting rugby league’s growth. With the right support the United Arab Emirates could be ready to take part in the 2013 Rugby League World Cup qualifiers.

Dear Readers, If you have first hand knowledge of the current Rugby League situation in United Arab Emirates we would love to hear from you. Please email us at: webmaster@rugbyleagueplanet.com or join our international rugby league Forums at http://forums.rugbyleagueplanet.com and let us all know what’s going on in your part of the world.