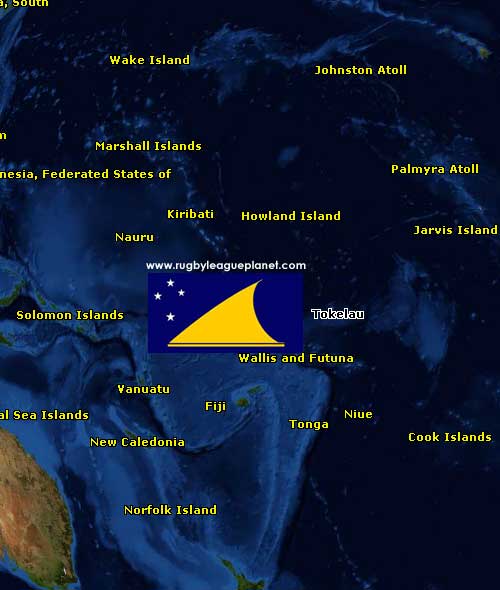 History – Tokelau is a small cluster of Islands located in the Pacific. Tokelau have been playing rugby league since the late 1980’s

Tokelau’s first major international rugby league event was the Pacific Cup in 1992. The Pacific Cup involves other pacific nations along with indigenous teams from Australia (Aborigines) and New Zealand (Maoris). They performed well for a small nation with wins over Norfolk Island and American Samoa.

Tokelau were late inclusions in the 2006 Pacific Cup competition. New Caledonia withdrew a week before the tournament was due to start leaving Tokelau with little time to prepare. Tokelau did not fair well in the Pool. They were grouped with Tonga and NZ Maoris and suffered two heavy defeats. Tokelau did restore some pride with a shock win win over Samoa in the 5th place play-off.

In February 2012 Tokelau will host a Tokelau Leaders Symposium where all the Tokelau League Heads from Tokelau, New Zealand and Australia will come together to discuss and formalise the structure for Rugby League. It’s envisaged from this symposium that rugby league will be able to officially form the Tokelau Rugby League Association (TRLA). The TRLA will be the driving force behind Tokelau’s rugby league development and also allow the game to receive support from the Tokelau government.

In December 2011 the Tokelau National Sports Coordinator made contact with the Rugby League International Federation (RLIF) to express their ambitions to come back to the rugby league fold. After the TRLA is formalised in August 2012 the first goal of the body is to obtain membership of the Asia Pacific Rugby League Confederation (APRLC).

In a boost to the sport locally a 10 day rugby league development workshop was held on Tokelau in February 2012. With all this focus on Rugby League in Tokelau it is only a matter of time before we see Tokelauans punch above their weight in the international rugby league arena.

Dear Readers, If you have first hand knowledge of the current Rugby League situation in Tokelau we would love to hear from you. Please email us at: webmaster@rugbyleagueplanet.com or join our international rugby league Forums at http://forums.rugbyleagueplanet.com and let us all know what’s going on in your part of the world.