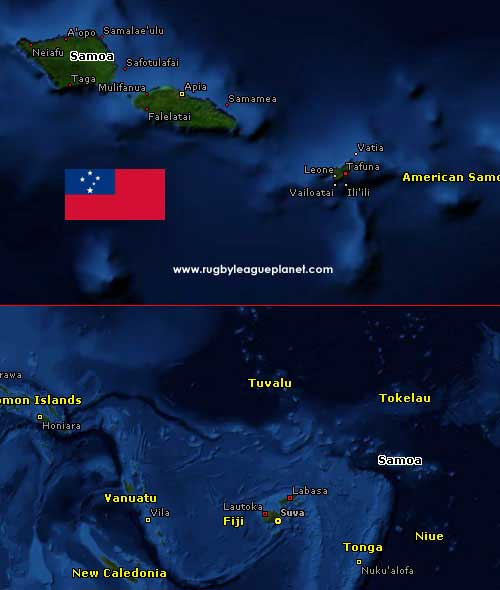 History – Samoa’s close proximity to Australia and New Zealand and the increase of Samoan’s playing in the Super League and National Rugby League has been a main factor in the growth of league in the pacific nation. Western Samoa’s first major competition was the 1988 Pacific Cup. They made a great first impression making it to the final. In a close game Western Samoa went down to the NZ Maoris 19 – 16.

In the 2000 World Cup Samoa won games against NZ Maoris and Scotland. Samoa lost against Ireland finishing 2nd in the Pool but still qualified for the quarter finals. Samoa played Australia in the quarter finals and went down to the eventual World Cup winners 66 – 10.

Samoa were grouped with Tonga and Ireland in the 2008 World Cup. Backed as the most likely team to top the pool and make it into the semi-finals, Samoa fell short of their potential. They got off to a great start beating Tonga 20 -12 at Penrith in front of a vocal crowd. Then Samoa’s wheels fell off when Ireland caused a major upset defeating Samoa 34 -16. All teams in the Pool finished with one win a piece. Ireland’s big win over Samoa was the difference leaving Samoa at the bottom of the group. Samoa saved some pride by winning the ranking game against France and avoiding the wooden spoon securing 9th place.

The domestic rugby league competition is looking to expand to 12 teams in 2012 (10 teams participated in 2011 season). The season starts in mid-March and will run for approximately 4 months. There are currently around 250 rugby league players in Samoa. This is also set to increase as other initiatives start to expand playing numbers at junior level. Two major schoolboy tournaments have already been organised for 2012 with 8 schools competing in the 10 -12 year old category and 8 schools competing in the 14 – 16 year old category. On top of this an Under 16 Rugby League High Performance Unit is scheduled to be up and running by May.

Samoa have been placed in Group B in the 2013 Rugby League World Cup (RLWC). They will be up against stiff competition with New Zealand, France and Papua New Guinea also joining them in their Group. On October 27th (Sunday) they will open their World Cup campaign against New Zealand at the Halliwell Jones Stadium in Warrington, England. Samoa will next take on Papua New Guinea at MS3 Craven Park in Hull, England on November the 4th (Monday). Samoa’s last pool match with see them fly to Perpignan in France to take on the French at Gilbert Brutus Stadium on November the 11th.

Dear Readers, If you have first hand knowledge of the current Rugby League situation in Samoa we would love to hear from you. Please email us at: webmaster@rugbyleagueplanet.com or join our international rugby league Forums at http://forums.rugbyleagueplanet.com and let us all know what’s going on in your part of the world.