History – Portugal are a new rugby league playing nation and continue the trend of European nations taking up the sport. The Portuguese Rugby League Association was formed in 2005 by Australian’s with Portuguese heritage.

In October 2007 Portugal played an international friendly against Malta at the Western Weekender Stadium, St Marys in Sydney’s western suburbs. Malta were to strong for the young Portuguese players winning 58 -12.

Portugal played in the International 9’s in Feb 2008 as part of a strategy to unearth more talent. Portugal decided against entering into the 2008 World Cup qualifiers preferring to concentrate on developing the sport back in Portugal. The PRLA are currently working with Rugby Union clubs in Portugal with the goal of having a Rugby League competition up and running in 2009.

In early 2009 Portugal were unranked in world rankings but were awarded official observer status by the Rugby League International Federation.

The PRLA are planning to have a team involved in the qualifiers for the 2013 Rugby League World Cup. The preperations for 2013 are already underway. The Portuguese are planning a development tour of Lisbon in June 2009. The tour will involve training clinics and rugby league matches for local players. They are also planning to tour South Africa in 2010 with a combination of Australian, French and South African based Portuguese players along with players from Portugal.

The recent success of the Rugby League World Cup will provide further funds to develop the sport throughout Europe. The Rugby League European Federation (RLEF) will now have more funds to invest in development officers and continue assisting rugby league’s growth. With the right support many more nations including Portugal could possibly be involved in the 2013 Rugby League World Cup qualifiers. It is hoped that the establishment of a local competition in and around Lisbon and continued development of the sport in Portugal will help the Portuguese create history in 2013.

In late 2009 Greece, Italy, Portugal and Malta took part in the inaugural Australian Mediterranean 4 Nations Shield held at Marconi Stadium over two weeks. Portugal failed to win a game during the tournament.

Dear Readers, If you have first hand knowledge of the current Rugby League situation in Portugal we would love to hear from you. Please email us at: webmaster@rugbyleagueplanet.com or join our international rugby league Forums at http://forums.rugbyleagueplanet.com and let us all know what’s going on in your part of the world. 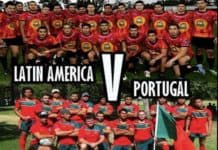 Latinos and Portuguese break tradition to clash in rugby league