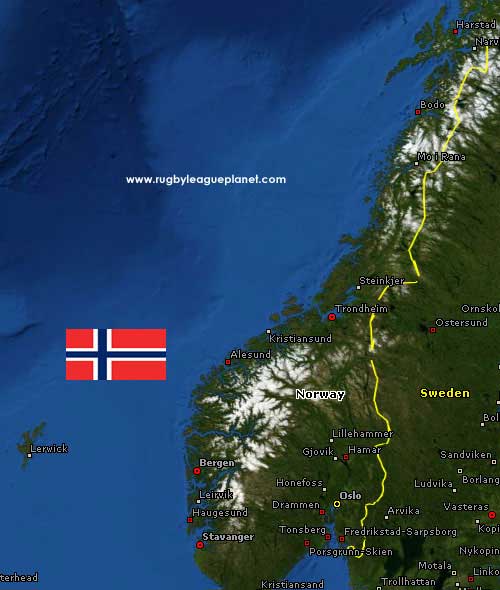 Rugby league was introduced into schools in north east in 2006 with the hope of setting up an ongoing schools competition.

In Feb 2008 Norway were unranked in European rankings but were awarded official observer status by the Rugby League European Federation. In late 2008 a committee was formed in Oslo with the goal of growing the sport in Norway.

Norway’s first ever rugby league event “The Scandinavia Cup” was held in Oslo Norway on 30th-31st of May 2009. The event was an International tournament and had teams from Denmark, Sweden, Catalonia, 2 from Germany and 3 from Norway participating. After this event a Norwegian national team was selected to play a first ever test against the Great Britain Pioneers.

The Oslo Capitals, Ahead of the 2012 season, The capitals are hungry for revenge after losing out to a strong Tromso Polar Bears side in the semi finals of 2011. They’ve been training hard in the winter and growing stronger as a team. They are currently missing two of their key-players as they are down under learning how to be better at the game so their experience will be sorely missed.

The Bodo Barbarians are one of two new teams in 2012′ competition founded by Lee Johnson, a former Tromso player who moved to the Northern neighbour city in the end of 2011. Rugby League is a new sport to Bodo but they have settled in well and one thing they’ve done is taking part in a Safe City project with Red Cross. After there was a series of female attacks in the city the club approached the local police and Red Cross and offered their big muscular physiques to helping out the people of their hometown by making sure party goers get home safe and well. Bodo played their first game ever against Tromso Polar Bears on the 28th of April 2012 as a pre-season warm-up before the first game of the season against Oslo Capitals which was played on the 12th of May in Bodo. Loaded with massive giants of men from the North they will not be an easy team to beat, especially at home.

Porsgrunn Pirates are another new team in this year’s competition led by Australian Matt South. Matt and a few local friends in Porsgrunn started up with a few trainings and now have a flourishing club that are ready to play. They played their first ever game against the division 2 club Flekkefjord Tigers where they looked at getting some experience and work out their positions before they enter their first ever season. The boys are new to the game but they will definitely be one of the teams to watch this year with their Underdog stamp.

Flisbyen Broncos: Last year’s runner up and 2010 Champions Flisbyen Broncos have not forgot their sore final loss to 2011 champions Tromso. With their experienced pack and young talents they will put on a great show in 2012.

In recent years, a second division has been introduced to cater with the demand of locals looking to take up Rugby League. Looking to preserve the quality of Rugby League seen in the first division , all new clubs will have to ply their trade in the second division before looking to take the step up. From speaking with Warren Helig , Rugby League Planet believes that there will be up to 16 clubs competing in Norwegian domestic Rugby league come 2013. These clubs bring a unique opportunity for businesses to tap into the Norwegian market.

Dear Readers, If you have first hand knowledge of the current Rugby League situation in Norway we would love to hear from you. Please email us at: webmaster@rugbyleagueplanet.com or join our international rugby league Forums at http://forums.rugbyleagueplanet.com and let us all know what’s going on in your part of the world.