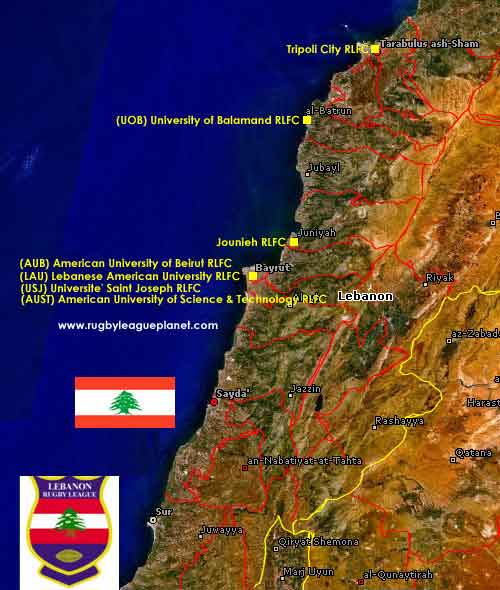 History – Lebanon’s first involvement in rugby league came when Australian’s with Lebanese heritage formed the Lebanese Rugby League. The initial goal was to field a team for the upcoming World Cup qualifiers ahead of the 2000 Rugby League World Cup.

In 1998 Lebanon made history by beating Japan 52 – 28 in Tokyo, Japan. It was the first ever 13 a-side international for both nations. This was a great start for Lebanon and provided them with much needed confidence leading into the World Cup qualifiers.

In 1999 Lebanon played in the World Cup Qualifiers. Lebanon first defeated Morocco 104 – 0 in the South of France. This was a record score for the Lebanese team. Lebanon then went onto narrowly defeat Italy 36 – 16. The final hurdle was against the Pacific Pool winners the United States. Lebanon easily defeated the United States 62 – 8, securing a place in the 2000 Rugby League World Cup.

Lebanon were grouped in the same Pool as New Zealand, Wales and Cook Islands for the 2000 Rugby League World Cup. The Cedars suffered a heavy defeat against New Zealand in their first pool game losing 64 – 0. In their next match against Wales, Lebanon performed much better narrowly going down to the Welsh 24 – 22. The final pool match against the Cook Islands saw Lebanon draw the game at 22 all. They bowed out of the tournament with two losses and one draw. Their showing in the World Cup generated interest back home and was the launch pad for the domestic competition today.

The Rugby League International Federation (RLIF) provided Lebanon with a development officer who went about setting up a junior structure and forming the first ever domestic rugby league competition in Lebanon. The competition kicked off in the winter of 2002 involving 4 teams. In November of the same year Lebanon played their first international game on home soil at Tripoli’s International Stadium. In front of nearly 10,000 Lebanese fans the Cedars were too strong for France winning 36 – 6 and securing the Mediterranean Cup.

In 2003 and 2004 Lebanon continued to play in the Mediterranean Cup winning both tournaments. The competition was cancelled in 2005 a few weeks before it was scheduled to proceed. The main reason behind the cancellation was security concerns from other nations like Malta and Greece who were going to compete in the competition for the first time.

In 2006/2007 Lebanon played qualifying games for the 2008 Rugby League World Cup. Both games against Ireland ended in a draw seeing Lebanon go through to the sudden death Repechage rounds. Lebanon knocked out Wales but could not overcome Samoa and missed out on the final spot in the World Cup.

The 2008 World Cup qualifiers have been a huge boost for the game in Lebanon. Lebanese games were televised throughout the Middle East. Lebanese officials are now pushing to increase the number of qualified coaches and people playing the game. LRL plan to strengthen the local competition in preparation for the 2013 Rugby League World Cup qualifiers. This could also include an increase in the amount of teams playing in the competition.

The recent success of the 2008 Rugby League World Cup will provide further funds to develop the sport throughout the Middle East. The Rugby League International Federation (RLIF) will now have more funds to invest in more development officers and continue assisting rugby league’s growth. With the right support and the advancements made already, Lebanon will be ready to take part in the 2013 Rugby League World Cup qualifiers. With more player depth Lebanon can hopefully qualify this time round and take Rugby League to a whole new level in the Middle East.

In early 2009 Lebanon were ranked 11th in World seedings by the Rugby League International Federation (RLIF).

In late 2009 Lebanon participated in the European Cup competition along side Wales, Ireland, Scotland, Serbia and Italy. Lebanon finished a respectable 3rd in the competition after defeating Ireland 40 – 16 in the play-off for 3rd place. By finishing 3rd Lebanon have secured their place in the 2010 European Nations Cup. The 2010 version will see the winner qualify as the 4th team in the 2011 Four Nations series due to be played in the northern hemisphere.

Dear Readers, If you have first hand knowledge of the current Rugby League situation in Lebanon we would love to hear from you. Please email us at: webmaster@rugbyleagueplanet.com or join our international rugby league Forums at http://forums.rugbyleagueplanet.com and let us all know what’s going on in your part of the world.