Top level domestic competition – In the early 2000’s they had a 3 team competition.

History – Japan’s first taste of rugby league came with their involvement in the World Seven’s competition of 1994 held at the Sydney Football Stadium. They continued to play in the 95, 96 and 97 tournaments as well. Their involvement in World 7’s was the launch pad for Japan starting up a local competition and playing their first international thirteen a side game against Lebanon in 1998.

In 2000 Japan took part in the Emerging Nations World Cup in the United Kingdom. They were grouped with Morocco and BARLA. The Japanese came close to defeating Morocco but unfortunately went down 12 – 8 and finished bottom of the Pool. Japan then played Canada in the 5th/6th play-off game. They played enterprising football but could not match the Canadian’s, securing the Emerging Nations World Cup wooden spoon.

After the Emerging Nations World Cup Japan’s only internationals were in 2002 & 2003 against the United States. On the home front OZ tag competitions were being introduced around Tokyo with mixed success. Around the same time Japan had three League clubs based around Tokyo playing in a small competition during the winter months.

In 2006 Japan took part in the 2008 World Cup Atlantic qualifiers. They travelled to the Aston, Pennsylvania in the United States to take on the Tomahawks on home soil. In front of over 1200 people the Samurais were outclassed by the bigger American’s. At full time the Tomahawks had advanced to the next stage of Word Cup qualifiers via a convincing 54 – 18 win over Japan.

2007 saw Japan play an international friendly against Malta at the Coffs Harbour International Stadium. Japan were no match for the Maltese as they were handed a rugby league lesson going down 82 – 0.

Japan competed in the International 9’s in Feb 2008 held at Cabramatta in Sydney’s South West. The Samurais are scheduled to take part in the competition again in 2009. The JRL use the 7’s and 9’s tournaments to assist in developing local players and also to unearth players who may qualify via the grandparent rule.

In 2009 the Rugby League European Federation (RLEF) sent a delegation to Tokyo to meet with JRL officials Amane Konishi, Noriyuki Tainaka and Kaoru Nakashima. The visit was a follow-up from the previous visit in 2008. The JRL are looking to be involved in more international matches in preparation for the 2013 World Cup qualifiers. Japan will also need to re-establish the local competition as currently only one club “Tokyo Warriors” play rugby league.

The recent success of the 2008 Rugby League World Cup will provide further funds to develop the sport throughout Asia. The Rugby League International Federation (RLIF) will now have more funds to invest in development officers and continue assisting rugby league’s growth. With continued support Japan could take the next step in the 2013 Word Cup qualifiers and make history by winning their first international game since 1999.

In 2009 Japan were ranked 17th in World seedings by the Rugby League International Federation (RLIF).

Dear Readers, If you have first hand knowledge of the current Rugby League situation in Japan we would love to hear from you. Please email us at: webmaster@rugbyleagueplanet.com or join our international rugby league Forums at http://forums.rugbyleagueplanet.com and let us all know what’s going on in your part of the world. 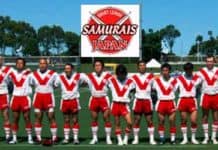 Japan the Rugby League nation of the Far East