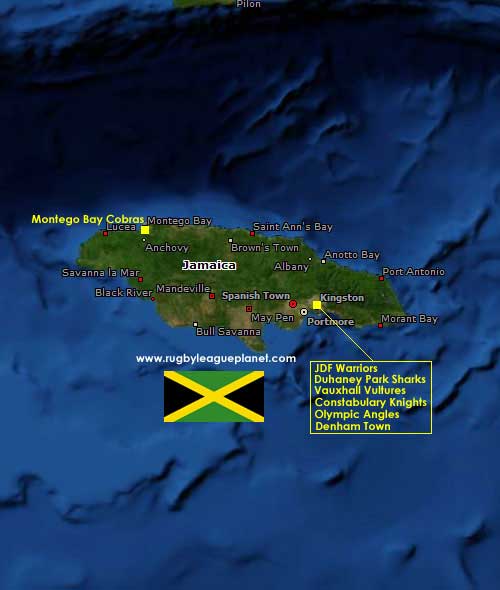 History– Jamaica fall under the West Indies Rugby League Federation. Rugby League in Jamaica started when local Rugby Union clubs disappointed by the lack of support from the Rugby Fraternity took the bold step of playing Rugby League. When Super League teams like the Leeds Rhinos from the English Super League started to provide support with the donation of balls, jerseys and providing coaching clinics the seeds were sown for the growth of league in Jamaica. The national competition commenced in 2005 with 4 teams.

In December 2005 the fledgling Jamaican Rugby League Competition got a huge boost with the announcement of a new partnership with the Global Insurance Company worth $4.3 Million.

In March 2007 the Jamaican National team played their first international against the touring West Yorkshire Police. The Jamaican’s skills were a little rusty but they showed that they had the athleticism to make it in rugby league. The national team were defeated, narrrowly losing 26 – 12. The 10 day tour saw the West Yorkshire Police attend local schools and also play against the local league team the Constabulary Knights.

In July/August 2007 Jamaica went on a tour of the United States. Jamaica played the Jacksonville Axemen, a team from the American National Rugby League. The tour was a first for the Jamaican’s. In front of a crowd of 1500 at Jacksonville’s Hodges Stadium, Jamaica put in a brave effort in the first half to only be down 20 -10 at half time. The fitness of the Jamaican’s was telling in the second half as the Axemen ran away with the game 46 – 20.

The British Royal Air Force toured Jamaica in January 2008. The Air Force were involved in promoting rugby league and assisting disadvantaged communities. The international match saw the RAF triumph 32 – 24 against the Nomads.

In 2009 Jamaica were ranked 24th in World seedings by the Rugby League International Federation (RLIF).

In February 2009 the RLEF appointed a new development officer to assist with Rugby League growth in Jamaica. This also co-insides with the appointment of the first professional coach for the Jamaican national team. Dean Thomas the new national coach comes with a wealth of experience coaching in the National Leagues in the UK. His appointment will help take the game in Jamaica to the next level.

The recent success of the 2008 Rugby League World Cup will provide further funds to develop the sport throughout the America’s. The Rugby League International Federation (RLIF) will now have more funds to invest in development officers and continue assisting rugby league’s growth. With the right support and the advancements made already Jamaica will be ready to take part in the Rugby League World Cup qualifiers for the first time.

In late 2009 Jamaica toured to the United States to play for the inaugural Atlantic Cup. In front of over 3500 fans in Jacksonville, Jamaica went into half time ahead 12 – 10. When they went onto the field in the second half they just could not hold onto the lead with the United States clinching the Atlantic Cup defeating Jamaica 37 – 22.

Dear Readers, If you have first hand knowledge of the current Rugby League situation in Jamaica we would love to hear from you. Please email us at: webmaster@rugbyleagueplanet.com or join our international rugby league Forums at http://forums.rugbyleagueplanet.com and let us all know what’s going on in your part of the world.