The third round of the Rugby League World Cup turned the predicted finishing positions for Group Two and Three upside down. Ireland caused a major upset by beating Samoa 34 – 16 and securing a position in the qualifying semi-final. Scotland put a scare into Fiji by winning their first ever World Cup game 18 – 16. It was not enough to deny Fiji a date with Ireland for the qualifying semi-final. All teams in group Two and Three came away with a win each showing how competitive the games were.

The last match for Group Three saw Ireland take on group favourites Samoa. Ireland raced away to an early lead by scoring three tries to lead 14 – 0 after 18 minutes. Samoa hit back in the 24th minute and again just before half time to trail 14 – 12. A penalty before half time saw Ireland get an extra 2 points going into the break. In the second half Ireland started with the same determination as the first half to score again in the 52nd minute. With another penalty goal by Pat Richard not long after Ireland were looking much more composed then Samoa with the score at 22 – 12. Samoa were dealt a major blow when their Captain Nigel Vagana was carried from the field with a knee injury. From there the flood gates opened as Samoa failed to hold onto the ball with Ireland racing away with a much deserved win 36 – 16.

The final match in Group Two was supposed to be a one way pass for Fiji into the qualifying semi-finals. Someone forgot to tell Scotland as they harassed the Fijians all game. Scotland lived up to their name “Bravehearts” as they put bodies on the line to keep Fiji to just 1 try at half time. Scotland went into the break with 2 converted tries and the smell of an upset in the air. Fiji came out a different team in the 2nd half and scored early on. With a penalty not long after the scores were levelled at 12 all. Fiji hit the front for the first time in the match with a try in the corner 14 – 16. But the Bravehearts never gave up and scored in the 71th minute to level the scores once again at 16 all. Danny Brough converted to put Scotland back in front and secure their first ever Rugby league World Cup win. Fiji were lucky the beat the French by a big margin the week before as they qualified on for and against for the qualifying semi-final show down with Ireland.

In Newcastle on Saturday night pride was up for grabs as the English and New Zealand teams went head to head to see who could take the upper hand leading into the semi-final the following week. The Kiwis were insulted before kick-off when England stayed in a huddle while the Kiwis performed the haka. This must of played on the Kiwis minds as England got off to a flying start racing away to a 24 – 8 half time lead. England looked like a different team to the one that played Australia the week before but all that changed when the teams came back for the second half. New Zealand upped the tempo and produced one of the comebacks of the tournament. England failed to contain the rampaging winger Manu Vatuvei who scored a record 4 tries. New Zealand kept England scoreless in the second half and secured second place in the group with a 36 – 24 victory.

On Sunday night the World Cup returned to Townsville were Australia provided some uncapped players with some game time leading into the semi-finals. Like they have throughout the World Cup the Kumuls put their bodies on the line putting in an outstanding performance against the Kangaroos. The Kangaroos had 60% possession in the first half and the Kumuls managed to keep Australia to 4 tries going into half time 22 – 0. After half time the Kumuls got off to a bad start with an intercept try to Australia in the 43rd minute. The Kumuls continued to punch above their weight with a spirited performance which saw Yere scoring late in the second to put Papua New Guinea on the score board. The game going to the Kangaroos 46 – 6. Papua New Guinea put up a better performance than England did against the Australian the previous week.

The qualifying semi-final between Ireland and Fiji took place on the Gold Coast during a warm and humid Monday night. Both sides scored 2 tries each going into half time with Fiji leading 12 -10. After half time the amount of possession Fiji had in the first half started to take its toll on Ireland. Eventually Fiji secured there spot in the semi-final winning 30 – 14. The win was big news back home in Fiji as they became the first Fijian team to make the semi-finals of a major tournament. It also continued the fairy tale story of a team full of park footballers rising against the odds to have a shot at Australia in the semi-final.

The last of the pool rounds provided an insight into how far the game has progressed in minnow nations. The performance of the smaller nations has been the highlight of the World Cup so far. The minnow nations have been so successful that there are calls to have ongoing meaningful internationals post World Cup. The World wait’s to see if the RLIF capitalises on the success of these nations and sanctions ongoing internationals. 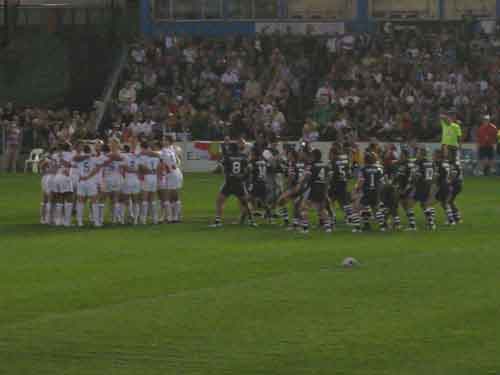