The battle of the pacific lived up to the pre-game hype with the Samoa and Tonga game full of big hits and great ball movement. Samoa raced away with an early 10 – 0 lead with a try in the 3rd minute and an intercept try in the 10th minute to Nigel Vagana. In the 20th minute Tonga hit back with a try to Michael Jennings to claw back 10 – 6. In the 26th minute Vagana dropped the ball over the line to let Tonga off the hook. 3 minutes later Leo Lato scored down the other end of the field to put Tonga in front for the first time 12 – 10. Samoa reclaimed the lead just before half time when Mat Utai scored in the corner 14 – 12. In the 52nd minute George Carmont scored under the post to put Samoa further ahead after a successful conversion 20 -12. The game drew the same sort of comparison as the first State of Origin match. There are plans to have Tonga and Samoa play each other annually. Samoa now need to beat the Irish on Wednesday to secure the qualifying semi-final spot.

In the first major upset of the World Cup a very enthusiastic Fijian team outplayed the much-fancied French team 42 – 6. The under rated Fijian forwards dominated the French up front while the Fijian backs had too much strike power for the French. Fiji’s opening game pretty much eliminated any chance France had of making the qualifying semi-final. It also drew concern from the RLIF who were planning on including the French in an expanded Four-Nations series in 2009.

On Sunday night the World Cup rolled into Melbourne with Australia meeting England. The atmosphere at the ground was electric with thousands of English fans venturing to Australia in the hope of seeing England knock Australia off their perch for the first time since 1972. Unfortunately for the English contingent Australia put on a dazzling display leaving England to pick up the pieces going down to Australia in their worst ever World Cup defeat 52 – 4. The Australian back line had too much speed for the Englishman and carved up what little defence England could muster. Tony Smith will need to make some serious changes, for England to have any hope of challenging for the World Cup Trophy.

The weekend games pretty much confirmed that Australia would finish top of the Super Pool. New Zealand and England would meet each other twice over the next two weeks and baring a major upset Fiji and Samoa will top their Pools and battle it out in the qualifying semi-final. It was a great weekend of Rugby League with the minnow nations once again showing why the World Cup is so important to the ongoing development of the international game. 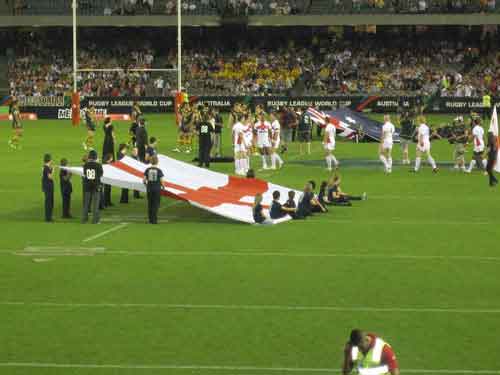 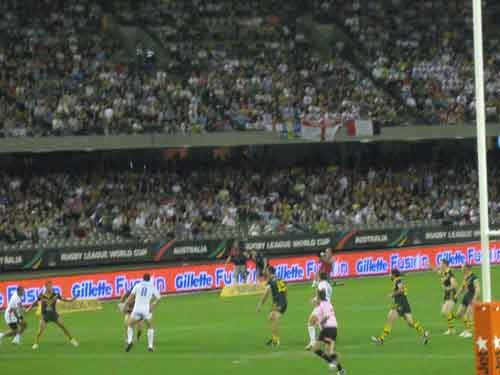